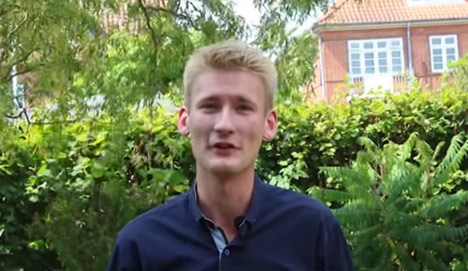 Peter Kofod Poulsen invites Danes to share stories about "problems with the open borders". Screenshot: YouTube/Meld en Østeuropæer
A Danish politician Monday defended launching a website that urges people to share their complaints about eastern Europeans — including their alleged contribution to the crime rate.
Peter Kofod Poulsen, a local politician for the anti-immigrant Danish People's Party who is also running for parliament, prompted allegations of racism after launching the website 'Meld en Østeuropæer', meaning "report an eastern European".
On the website, the 23-year-old said he wanted to hear from anyone whose home had been burgled by eastern Europeans, who had lost their job to "an underpaid eastern European", who felt insecure or had been "bothered in other ways" by the group.
Citizens of eastern European countries commit 27.4 percent of Danish burglaries that result in charges being pressed, the website stated, citing police data from last year.
"I think there is a need for some stories by ordinary Danes to be put on the table. They are experiencing problems with the open borders," he told AFP, referring to the EU's freedom of movement.
More than one in four Danes voted for the Danish People's Party in this year's EU election, making it the largest Danish party in the European parliament.
Reintroducing border controls was a key campaign issue for the populist party, which was able to tighten Danish immigration policy under the country's former right-wing government in return for its support in parliament.
In neighbouring Sweden, the anti-immigrant Sweden Democrats more than doubled their votes in Sunday's general election to 13.0 percent.
Poulsen, who is studying to become a teacher, said he had received around 1,900 messages since launching the site on Friday, although that number included spam and insults from people who disagreed with its content.
"I have no way of checking these stories that are received. What I have chosen to do is to completely anonymise the stories that are made public," the Haderslev councillor said.
A parliamentary candidate for the Liberal Alliance party, Danny Malkowski, launched a "report a racist" website, Meld en racist, in response, while PR consultant Frej Elbaek Eriksen suggested people use Poulsen's website to share stories of "particularly friendly eastern Europeans".
"I want to emphasise that I have nothing whatsoever against eastern Europeans in general," Poulsen said.