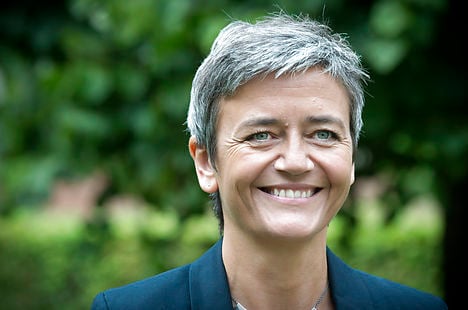 Margrethe Vestager was all smiles in Copenhagen on Wednesday after being named the EU Commissioner for competition. Photo: Jens Nørgaard Larsen/Scanpix
Denmark’s recently-appointed EU Commissioner Margrethe Vestager will head up the competition portfolio under Jean-Claude Juncker, securing Denmark the “heavy” position it sought in Brussels.
Political analysts say that Vestager will have no shortage of major issues to deal with her new role, including the commission’s ongoing antitrust case against tech giant Google.
At a press conference in Copenhagen, Vestager said her first challenge would be her upcoming hearing at the European Parliament.
"That is a prerequisite for me to become commissioner. I need to earn parliament's trust, so therefore it is my single most important task," she said.
Looking beyond the confirmation hearing, she said that "Europe is a place where we have new and very large tasks to solve".
Juncker announced his full team on Wednesday, which included the naming of six vice-presidents.
"In the new Commission, there are no first or second-class Commissioners – there are team leaders and team players. They will work together in a spirit of collegiality and mutual dependence. I want to overcome silo-mentalities and introduce a new collaborative way of working in areas where Europe can really make a difference,” he said.
Vestager will report to Finland’s Jyrki Katainen, who will be the vice president for jobs, growth, investment and competitiveness.
Vestager said she welcomed the structure.
“I think it is a good idea to ask a set of commissioners to take on leadership in a number of areas. I think, we will succeed best as a team,” she said.
Vestager’s appointment as competition commissioner came despite a leaked draft of Juncker’s cabinet that tipped her as the environment commissioner.