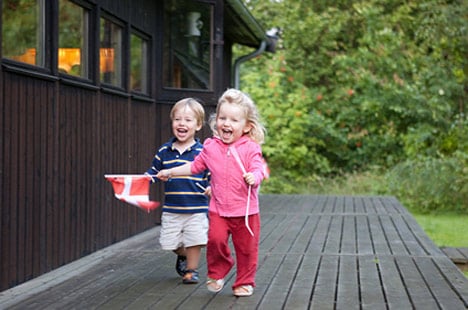 Born happier? Photo: Lars Plougmann/Flickr
After years of research, I thought I’d finally gotten to the bottom of why the Danes have consistently claimed to be the happiest people in world for the last four or so decades.
This involved a complex but rational analysis of a people who have, by and large, figured out precisely the conditions conducive to a contented life and fine-tuned their society accordingly.
Equality of wealth, opportunity and gender; social cohesion; general wealth (well, a bit of cash helps); safety; freedom; not being Swedish – these were just some of the reasons I came up with to explain the permanent fog of giddy ecstasy through which most Danes claim to experience the world. (If you want to know all the secrets, they are detailed in my – plug alert! – latest book.)
By decoding Danish happiness, I also felt I was able to comfort and encourage my readers: In theory, all of us now had within our grasp the levels of contentedness achieved by my adopted countrymen. If we could all just join a handball club, eat more pork, and give three quarters of our earnings to the state, then we, too, could be deliriously satisfied with our lots.
But no. Turns out, it’s all in your genes. Or, at least, that’s according to a recent report from the University of Warwick. The report claims that there is something unique in the Danes’ genes that gives them a frankly unfair advantage in the happiness stakes.
See also: Danish happiness is all in the genes: study
The co-author of the report, the improbably named Dr Eugenio Proto (who, perhaps tellingly, is neither a geneticist or an epidemiologist, but an economist), commented: “We found that the greater a nation’s genetic distance from Denmark, the lower the reported wellbeing of that nation … the long and short variants of this gene are correlated with different probabilities of clinical depression.” Apparently, if you have the short version of the happiness gene then you will be more neurotic and have lower life satisfaction. The Danes have more of the long one, natch.
This was bad news. “Clearly my miserable disposition is all because of my short genes,” I exclaimed, falling to my knees, my hands reaching heavenwards. “What hope have I got? If only I’d been born Danish.”
Happily, rationality soon returned.
There are several dubious aspects to this report, not least the Danes’ record high consumption of antidepressants, which would appear to contradict the report’s assertions regarding clinical depression.
Besides, these kinds of claims for genetic superiority are always highly suspect, whether they concern a people’s ability to run fast, their tendency towards criminality or trustworthiness, laziness, or whatever. More than a whiff of pre-war racial purity thinking, no?
Then comes the classic mistake made by many researchers in this field: the interpretation of data from contemporary Americans based on which part of the world their ancestors came from. Americans with roots back to the 19th century Danish diaspora tend to be happier, claim the authors of the report, proof of a genetic link. But this interpretation always fails to take into account the very special characteristics of those who left Scandinavia for America 150 years ago, and in particular of those who survived to breed there. They were, by definition, exceptional, so it stands to reason their descendants will be similarly outlying.
Perhaps I’m deluding myself, clutching at straws; perhaps my parents have lumbered me with moody, neurotic, misanthropic DNA, perhaps it’s out of my hands, the wind has changed and my face must now stay like this. But if we all give in to genetic determinism, what hope do we have of improving our levels of life satisfaction? Should I give up all that amazing voluntary work I do for charity, should I forget about that Caribbean holiday, or the new Audi I just ordered (we are deep into hypothetical territory here, I should add). And if happiness is all in our genes, where does that leave free will, where does that leave our hopes of, once all this Isis business has died down, creating a harmonious, multiracial planet?
And, not least, where does it leave those poor, miserable, genetically inferior Swedes?