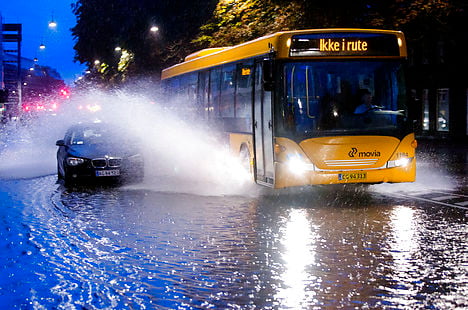 Photo: Jens Astrup/Scanpix
Parts of Copenhagen were a wet mess on Sunday after more than 100mm of rain pummelled the city in the early morning hours.
Historic amusement park Tivoli, the prison Vestre Fængsel and the fortress Kastellet were among the locations reported as flooded by the Copenhagen Fire Brigade (Københavns Brandvæsen), which received 44 calls about water problems overnight.
Photo Gallery: Downpour soaks Copenhagen
“We have pumped water from Kastellet and Tivoli also received a lot of water. It is unclear how bad the damages are. Vestre Fængsel’s basement is also flooded and we have asked [the Danish Emergency Management Agency] for assistance,” Fire Brigade spokesman Kristian Næsted told TV2 News.
A spokesperson for Vestre Fængsel told TV2 News that the flooding has not compromised the safety of the facility’s 400-500 prisoners.
Private emergency assistance company Falck received nearly 100 calls reporting water damage and predicted that there could be many more as residents woke up on Sunday to find flooded basements.
Traffic problems were also created by flooded streets and photos on social media revealed severely flooded roads, including this shot of a car almost completely submerged in water on Lyngbyvej.

The meteorology institute DMI said that parts of Copenhagen received up to 104mm in a span of under three hours, while other areas were hit with 50-80mm of rain. It was the heaviest downpour since July 2nd, 2011 when 135mm of rain drenched the city.
NOTE: This story was updated with new rain totals from DMI.