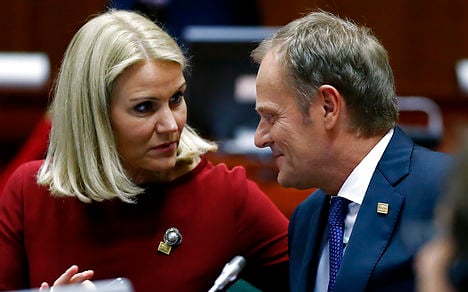 Danish PM Helle Thorning-Schmidt and Poland's Prime Minister Donald Tusk chat at the start of a European Union summit in Brussels on Saturday. Photo: Yves Herman/Scanpix
After months of speculation, it turns out that Helle Thorning-Schmidt was right all along. The Danish prime minister will not be leaving her current gig for a prestigious post in Brussels.
With the Saturday appointments of Poland’s prime minister, Donald Tusk, as European Council president and Italy’s foreign minister, Federica Mogherini, as the EU’s new High Representative for Foreign Affairs, Thorning-Schmidt will be returning to Copenhagen as Denmark’s prime minister.
Thorning-Schmidt said the appointment of Tusk, who going in to Saturday’s meeting in Brussels was seen as the favourite between the two, was with the full backing of Denmark.
“It has been important for Denmark that the person who fills the role of European Council president as the backing of all countries. Donald Tusk has that. And therefore Denmark also supported his candidacy,” Thorning-Schmidt said in a written statement.
Tusk is the first eastern European to be appointed to such a senior role in the EU.
"I come to Brussels from a country that deeply believes in the significance of Europe," Tusk said at a news conference with outgoing Council president Herman Van Rompuy.
Strongly backed by Germany's Angela Merkel, Tusk is a pro-European free marketeer with roots in Poland's Solidarity anti-Soviet trade union who has been prime minister since 2007.
Thorning-Schmidt said she was happy that the position went to Poland.
“The eastern and central European countries have been members of the EU for ten years. Denmark has always been a supporter of their membership, which was decided in Copenhagen in 2002. Therefore it is also both natural and gratifying that the European Council president comes from Poland,” she said.