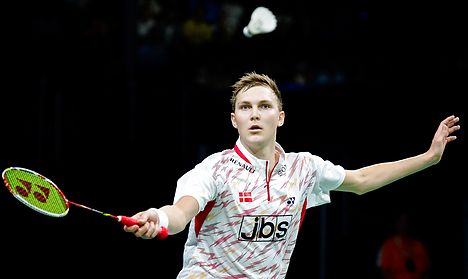 Denmark's Viktor Axelsen will face off against top-ranked Lee Chong Wei of Malaysia on Saturday at the 2014 BWF Badminton World championships in suburban Copenhagen. Photo: Johnathan Nackstrad/Scanpix
Top-ranked Lee Chong Wei of Malaysia continued his charge towards an elusive first world championship title by coasting into the semi-finals of the men's singles in Copenhagen on Friday
while rising Indian star P.V. Sindhu won through to the last four of the women's draw.
Lee, twice a runner-up at the world event, displayed his class by shredding apart Chinese sixth seed Wang Zhengming to record a comprehensive 21-8, 21-11 victory.
The Malaysian aligned impeccable defence with ruthless efficiency as he capitalised on the opportunities that came his way to make light work of his opponent, a former world junior champion, and stay on course for a title showdown with China's world number two Chen Long.
"I used yesterday to prepare for the game today and everything went to plan," said Lee, who was rarely tested in his last-16 clash with Ireland's Scott Evans on Thursday. "It's true I tried to shorten the points and avoid long rallies. That was the plan. Now I'm just looking forward to tomorrow (Saturday)."
Next up for Lee will be Denmark's Viktor Axelsen. The 14th seed, and the Danes' remaining home hope, was a 21-14, 21-14 winner over Taiwan's Chou Tien-chen, for a place in the final.
Earlier Chen clawed his way past South Korean seventh seed Son Wan-ho 21-14, 12-21, 21-17 to keep China firmly in contention to win a seventh consecutive singles title.
Chen will play fifth seed Tommy Sugiarto in the semis after the Indonesian laboured his way past 37th-ranked Dutchman Eric Pang 22-20, 21-19.
Sindhu guaranteed another bronze
Indian teenager P.V. Sindhu made history as she stunned China's All-England champion Wang Shixian 19-21, 21-19, 21-15 to reach the last four and become the first player from her country to win multiple world championship medals.
Sindhu, who doesn't turn 20 until next July, won bronze a year ago in Guangzhou and is guaranteed at least bronze in Denmark after disposing of second seed Wang in an 85-minute marathon.
"I'm very happy. It was a really long match," said the 11th seed, who saved three match points in the previous round against South Korea's Bae Yeon-ju."I was trailing 16-12 in the second set and made a very good comeback. I played really well and I hope to go much further," added Sindhu, who will face Carolina Marin next after the European champion assured Spain of a first ever world championship medal by defeating Taiwanese eighth seed Tai Tzu-ying 19-21, 21-19, 21-11.
World number one Li Xuerui reached the semi-finals after her stroke play proved too much for the other leading Indian, seventh seed Saina Nehwal.
China's Li, seeking to avenge her painful defeat in the 2013 final, swept past Saina 21-15, 21-15 to move a step closer to adding to the Olympic crown she won at London 2012. The 23-year-old will face Japan's Minatsu Mitani for a shot at the title.