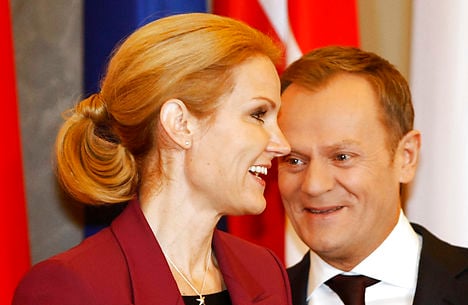 In a file photo from 2011, Helle Thorning-Schmidt meets with her Polish counterpart Donald Tusk. One of them is likely to be named the new European Council president. Photo: Kacper Pempel/Scanpix
Political odds makers say that heading into Saturday’s EU top meeting in Brussels, PM Helle Thorning-Schmidt is one of the two most likely picks for the position of European Council president.
Numerous European media have reported that Thorning-Schmidt and Polish PM Donald Tusk are the last two names standing in the long drawn-out contest to choose a successor to Herman Van Rompuy, who steps down at the end of November.
Tusk is said to have the upper hand and has reportedly earned the backing of British PM David Cameron, long thought to prefer the Danish PM for the job. Thorning-Schmidt’s chances have been hurt by the likely appointment of Italy’s foreign minister, Federica Mogherini, as the next EU foreign policy chief. Mogherini’s appointment makes it unlikely that another centre-left woman from ‘old’ Europe will get the nod for the other available top position.
That makes Tusk, representing both the centre-right and eastern countries who feel entitled to one of the union’s top posts, the odds-on favourite. According to Reuters, Tusk has received increasingly strong support since last month’s meeting that failed to produce consensus on the top job appointments.
German Chancellor Angela Merkel backed Tusk’s candidacy last month and with Cameron and French President François Hollande having both reportedly dropped their objections to Tusk, many European media outlets are positioning the Pole as the clear favourite.
"European leaders are increasingly strongly persuading Donald Tusk to assume the post of president of the European Council," Polish government spokeswoman Malgorzata Kidawa-Blonska told the news agency. "The prime minister is treating this proposal very seriously, analyzing its consequences for Poland, its security, especially in light of the Ukraine crisis."
Thorning-Schmidt has said for months that she is not interested in leaving Denmark for Brussels but that has done little to dampen the speculations of the Danish and international press.
Before Saturday’s meeting, the Danish PM will first fly to Paris for a meeting with Hollande and other European Social Democratic leaders to discuss their strategy for the European Council meeting.