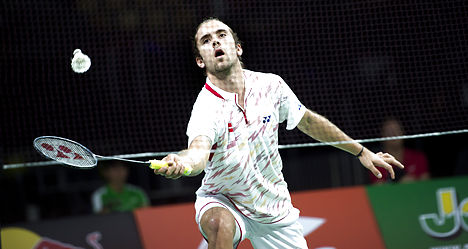 Jørgensen was forced to abandon his contest against the unseeded Chou Tien-chen. Photo: Keld Navntoft/Scanpix
Jan Ø Jørgensen's dreams of claiming a world championship title on home soil were cruelly destroyed by injury on Thursday as the Danish third seed was forced to retire in his last-16 match against Taiwan's Chou Tien-chen.
Jørgensen was forced to abandon the contest trailing the unseeded Chou 21-9, 9-4 with his coach later saying the world number three suffered a torn patella tendon, causing acute inflammation and pain in his right knee, as efforts to patch him up proved unsuccessful.
"I'm very upset. The preparations for the tournament went well, I felt I had a good draw," said Jørgensen, who had been hoping to become the first European world champion since compatriot Peter Rasmussen in 1997. "I would prefer losing rather than not being able to play. Not being able to give a fight is worse. My whole dream of winning, of playing, burst so fast because I knew it was not a small thing. I knew it was a big problem, I struggled straight away."
Jørgensen had been on a collision course with world number one Lee Chong Wei of Malaysia, with the pair set to meet in the semi-finals, but the Dane's retirement removes another obstacle from the top seed's bid for a first world title.
Danish number two Hans-Kristian Vittinghus was knocked off by South Korean seventh seed Son Wan-ho 21-19, 21-12, but things went better for fellow Dane Viktor Axelsen, who moved through after beating Nguyen Tien Minh of Vietnam 21-16, 21-17. Dutchman Eric Pang also reached the quarters.
Lee moves on, women's defending champ falls
Lee's bid for an elusive maiden title faced little resistance from third-round opponent Scott Evans of Ireland as he raced to a 21-11, 21-12 win.
"I just focussed on myself, taking things easy to prepare for tomorrow (Friday)," said the world number one, who will encounter Chinese sixth seed Wang Zhengming, a 21-15, 21-18 winner over Hong Kong's Wei Nan, with a place in the last four at stake.
There was a huge surprise in the women's draw as defending champion Intanon crashed out in the third round after the 19-year-old succumbed to Japanese 16th seed Minatsu Mitani 8-21, 21-12, 21-18.
"She was quicker and faster in the second game. She made me nervous by defending my smashes so well. I was getting tired after long rallies," said Intanon, who explained that she had spent five days in hospital prior to the tournament with a temperature that peaked at 39.5 degrees Celsius (103.1 degrees Fahrenheit).
"I couldn't play at 100 percent just four days after leaving hospital. I was only around 50 percent," said the 2013 champion.
Mitani's reward is a quarter-final against Korean fifth seed Sung Ji-hyun, a 21-10, 21-16 winner over Indonesia's Lindaweni Fanetri.
"After the second game I tried to simply play to my strengths, be patient and move around the court," said Mitani. "I didn't think about strategy I just tried to play my best."
Earlier world number one Li Xuerui of China blasted away 12th-seeded compatriot Han Li 21-9, 21-17 to march into the last eight.