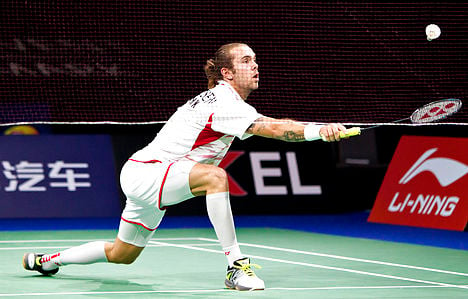 Jan O. Jørgensen of Denmark in action against Eetu Heino of Finland on Wednesday. Photo: Nils Meilvang/Scanpix
Denmark's Jan Ø Jørgensen continued his quest to end China's dominance at the badminton world championships as he breezed into the last 16 of the men's singles in Copenhagen on Wednesday.
Third seed Jørgensen, his confidence boosted by June's Indonesian Open title, eased his way past Finland's Eetu Heino 21-9, 21-17 in just under 30 minutes to take his place in the third round.
"It was a great game. I'm happy with the outcome and the way I played," said Jørgensen, 26, who along with top seed Lee Chong Wei of Malaysia is seeking to bring an end to China's run of six straight titles.
Despite relatively serene progress it wasn't all plain sailing for the Dane as a second-game blip gave his opponent a sniff of forcing a decider before Jørgensen regained his composure to slam that door shut.
Jørgensen cited a pre-existing foot problem as his cause for concern that prompted a mid-contest stumble but allayed any fears it might derail his bid to become the first European to lift the world title since compatriot Peter Rasmussen in 1997.
"I struggled a bit with my foot during a training camp before the world championships. I slipped during the second set…and lost my concentration a little bit. Everything's fine though," said Jørgensen, who is set to face either Japanese 15th seed Sho Sasaki or Taiwan's Chou Tien-chen for a spot in the quarter-finals.
Jørgensen is on a collision course with world number one Lee Chong Wei, who also marched on in his bid for an elusive world championship title on Wednesday.
The Malaysian top seed, runner-up at the last two world finals, made light work of Germany's Dieter Domke with Lee cruising to a 21-12, 21-9 victory.
"He is a lower-ranked opponent but he put up a fight although I felt confident all the way through," said Lee after dispatching his 43rd-ranked opponent.
Meanwhile Wang Yihan eliminated the last remaining Dane, Anna Thea Madsen, from the women's draw.
Third seed Wang, the 2011 champion, swatted aside Madsen 21-13, 21-13 and will await the winner of a round two clash between top-ranked European Carolina Marin, the world number 10 from Spain, and Malaysia's Tee Jing Yi.
South Korea's Bae Yeon-ju, Taiwan's Tai Tzu-ying and 2013 bronze medallist P.V. Sindhu Of India moved on in routine fashion but tenth seed Porntip Buranaprasertsuk of Thailand was knocked out by in-form Canadian Michelle Li, who is coming off an historic singles gold for her country at the Commonwealth Games in Glasgow.