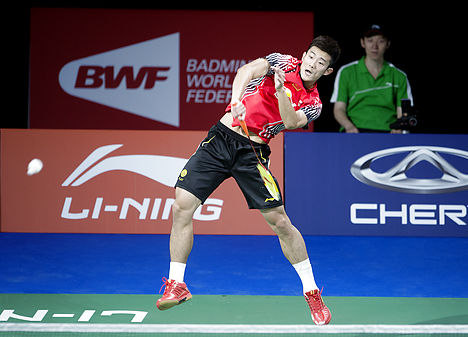 Chen Long is carrying China's hopes in Copenhagen. Photo: Liselotte Sabroe/Scanpix
Chen Long eased his way into the second round of the badminton world championship on Tuesday with a routine victory over Austrian rank outsider Luka Wraber in Copenhagen.
Chinese second seed Chen is carrying the burden of his country's expectations with global superstar and five-time world champion Lin Dan out of the equation in Denmark and the 25-year-old produced a solid performance to dismantle 91st-ranked Wraber 21-8, 21-10.
Chen's patchy form has restricted the world number two to just one title, the Korean Open in January, this season but the Chinese are pinning their hopes on him to maintain the country's dominance in the men's singles with a seventh straight title.
Indonesia's Tommy Sugiarto, a potential semi-final opponent for Chen, never looked in trouble against Singapore's Zi Liang Derek Wong as the fifth seed recorded a 21-12, 21-14 victory to take the first step in his quest to emulate his father, Icuk, who won the world title in the Danish capital in 1983.
Seventh seed Son Wan-ho, though, narrowly avoided becoming the biggest casualty in the men's draw as he was forced to dig deep to see off the challenge from plucky Frenchman Brice Leverdez, who had the Korean seemingly on the ropes before Son rallied to come through a gripping contest 20-22, 21-12, 21-19.
Danish 10th seed Hans-Kristian Vittinghus defeated Hsu Jen-hao of Taipei 21-17, 21-11.
World number one Li Xuerui advanced into the last 16 of the women's tournament as the defending Olympic champion saw off  spirited resistance from Czech player Kristina Gavnholt to record a 21-13, 21-17 triumph.
Li lost last year's final to Thailand's Ratchanok Intanon and is keen to make amends for the painful defeat she suffered in Guangzhou.
"Losing (the 2013 final) was very sad – the World Championships is difficult for me," the Chinese player told bwfbadminton.org. "I have had a lot to overcome mentally, but now I have done that I come here with much more confidence."
As for title-holder Intanon she was put under pressure by Spain's Beatriz Corrales early but her class eventually prevailed in a 21-18, 21-10 win.
Olympic bronze medallist Saina Nehwal of India made light work of Russia's Natalia Perminova as she swept into round three courtesy of a 21-11, 21-9 rout.
South Korean fifth seed Sung Ji-hyun has made it as far as the third round without taking to the court at all after an initial bye was followed by a walkover while China's Han Li and Japan's Minatsu Mitani are also through to last 16.
There was no such luck for Thai 14th seed Nichaon Jindapon, though, who was bounced out by Indonesia's Lindaweni Fanetri.
Unseeded Dane Line Kjærsfeldt fell to 16th seed Minatsu Mitani of Japan 21-11, 21-10.