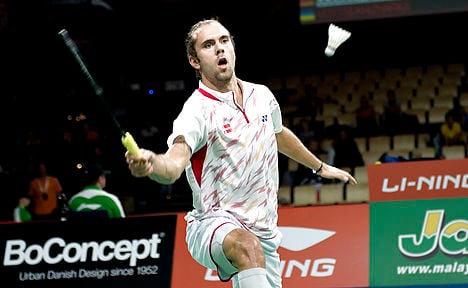 Jan Ø Jørgensen. Photo: Keld Navntoft/Scanpix
Jan Jørgensen, the dangerously improving world number three who should be at his best on home soil, outplayed Maxime Moreels of Belgium 21-15, 21-11 on the opening day of the Badminton World Championship in Copenhagen on Monday.
Two months ago the Dane won his first Super Series title and shortly before that beat Lin Dan, who has six more days as world champion. Jorgensen should meet Lee Chong-Wei in the semis, who began what is almost certainly his best chance of winning the world title with a routine win over Korean opponent Lee Dong Keun
The world number one from Malaysia's 21-11, 21-12 first round win over Lee contained a higher ratio of fast airborne attacks than usual in his superbly well varied game.
It is two months since Chong Wei last competed – a loss to Japan's Kenichi Tago in Indonesia – but there was no lack of match sharpness and no obvious evidence either of his persistent groin injury.
Despite all this the 31-year-old legend declined to agree that this is the best chance of winning the world title that has somehow eluded him.
"I'll try my best, that's all," he said. "I can still feel the injury, but today I was very aggressive and I was happy with my performance."
Chong-Wei was next due to play the winner of Kashyap Parupalli, the former Commonwealth bronze medallist from India, and Dieter Domke, a top 50 German.
Good as he may feel, Chong-Wei won't look beyond that.
He may be wise for in addition to Jørgensen's hot hand, the other seed in his half also played well. Wang Zhengming, the sixth-seeded Chinese player, accounted for Michal Rogalski of Poland 21-15,21-12 and could meet Chong-wei in the quarters.
Earlier Kento Momota, the 20-year-old Japanese player who helped make badminton history at Delhi in May, suffered a dramatic reversal of fortunes when he became the first seeded player to be beaten.
Momota had been a winner in his country's stunning capture of the Thomas Cup world team title, but was unable to capitalise on a lead of a game and 15-11 against Wei Nan, the Hong Kong player he had beaten in Delhi, losing 18-21, 21-18, 21-12.