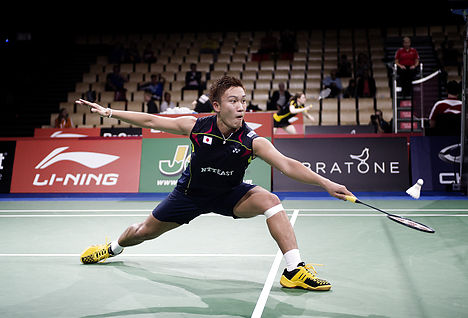 Kento Momota of Japan in action against Wei Nan of Hong Kong during their first match in Badminton World Championship in Copenhagen Photo: Liselotte Sabroe/Scanpix
Kento Momota, the brilliant 20-year-old left-hander who helped make a piece of badminton history at Delhi in May, caused another sensation when he exited the World Championships in suburban Copenhagen within two hours of the start on Monday.
Momota played a crucial role in the defeats of China and Malaysia which earned Japan the Thomas Cup world team title for the very first time, but was now overturned by a man he beat during that sequence of triumphs.
This was Wei Nan, the world number 20 from Hong Kong, who trailed by a game and 11-15, and yet fought tenaciously back to impose an 18-21, 21-18, 21-12 reverse on Momota.
It was hard to believe that Wei had managed only 23 points in two games from his opponent three months ago, so ruthlessly did he now take advantage of Momota's decline in pace in the second half of the match.
There was a suspicion that this may partly have been due to a knee injury Momota sustained in training, but there was no doubting the tenacity with which Wei took the chances which unexpectedly arrived.
"I was upset by that loss in Delhi and I told myself to struggle hard if I found myself losing again," Wei said. "I could feel he was beginning to slow in the third game and I was able to find openings to attack."
Wei now has a chance of a last 16 encounter, probably against Wang Zhengming, the 13th seeded Chinese, and perhaps of progressing to a quarter-final with Lee Chong Wei, the top-seeded world number one from Malaysia.
Lee, who was due for an opener against Lee Dong Keun, the world number 32 from Korea, has remarkably never won the world title.
Now though, with the titleholder Lin Dan absent, and two top ten players, Kenichi Tago of Japan, and Simon Santoso of Indonesia, both withdrawing, he may never have a better chance.