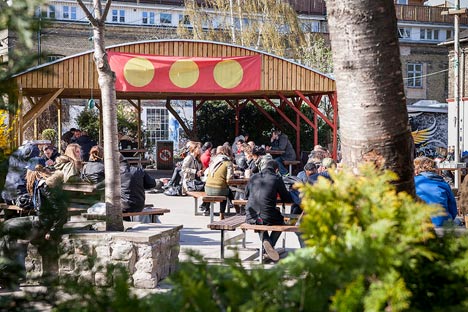 Photo: Peter Mulvany, News Øresund/Flickr
Money from the illegal sale of cannabis in the freetown of Christiania is funding playgrounds and other community projects, Copenhagen Police allege.
In their ongoing investigation following a raid in March that led to 80 arrests – the largest bust in Christiania’s history – police say that have uncovered proof of cannabis money going to improvement projects within the commune.
Police prosecutor Steen Bechmann Jacobsen told Information newspaper that he wouldn’t get into the details of an ongoing investigation but that police believe cannabis money goes toward projects carried out in Christiania on so-called ‘action days’, in which residents clean and repair shared areas.
“Our general claim is that on these ‘action days’, [cannabis] surpluses go toward projects that you could characterise as being in the public interest of Christiania,” he said.
Police say that they have evidence of cannabis money specifically going to the renovation of a playground.
A Pusher Street spokesperson denied the police accusations.
“I’d like to see proof of that,” Adam Seitzmayer told Information.
But Seitzmayer didn’t rule out that cannabis dealers could have given money to Christiania projects.
“The pushers are also Christianites, so it could be that they have privately contributed economically,” he said.
A Christiania resident who wanted to remain anonymous also rejected the police claim.
“It couldn’t happen. That is money from criminality. We don’t want that. And it couldn’t have happened without the authorities noticing it,” the woman told Information.

How the money works
Christiania residents and businesses pay a monthly ‘rent’ into a shared fund, the use of which is controlled by residents themselves. A group of around 20 individuals holds monthly meetings to decide how to use the money. The self-proclaimed freetown does not receive money from the national or municipal government for the upkeep of its property.
In an historic 2011 deal – struck 40 years after squatters first claimed the former military area for themselves – residents purchased Christiania’s land and structures from the national government for around 86 million kroner ($15.4 million) via the establishment of the Christiania Fund. The fund’s chairman, Knud Foldschack, told Information that he wasn’t aware of cannabis money being used to improve Christiania.
“I don’t get involved in that. In that regard, I’m just like any other landlord who doesn’t know how the rent is being paid. But the fund has not receive a krone of cannabis money,” he said.
See also: Denmark to look at decriminalising drugs
Politicians: Address the real issue
A pair of left-wing politicians told Information that there was a simple solution to keep illegal drug money from going to playgrounds and the like: legalize cannabis.
“The Danish parliament hasn’t found the backbone to address the actual problem, which is that money from the cannabis trade ends up with criminals rather than legally financing daycare institutions and similar things via the national treasury,” Pernille Skipper of the Red-Green Alliance (Enhedslisten) told Information.
The Socialist People’s Party’s Karina Lorentzen agreed.
“The time has come to discuss which model Denmark should adopt,” she told Information with reference to both Portugal and the US states of Colorado and Washington, all of which have legalized cannabis.
But unless things change, she said that Christianites should not accept any money from Pusher Street’s dealers.
“The law says that the cannabis trade is illegal, so there isn’t much more to it. The money from selling cannabis shouldn’t finance community projects regardless of how good the projects are,” she said.