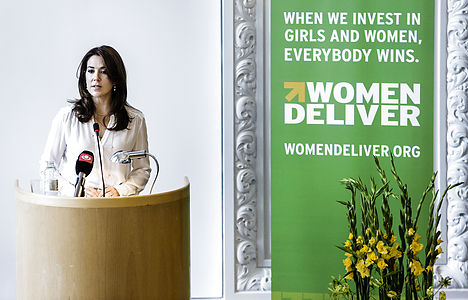 Crown Princess Mary announced Denmark's selection as host on Monday at Christiansborg.
Copenhagen was announced on Monday as the host of the next Women Deliver global conference, to be held in May 2016.
The Women Deliver conference is described as “the largest gathering on girls’ and women’s rights” and organisers said that the Danish capital was a natural choice as the location for the triennial event.
“The Danish government has played a key role in advancing girls’ and women’s health and rights and, with its support, this conference could catapult these issues to the forefront of the global development agenda and unify advocates from all around the world around one simple ask: Invest in girls and women – it pays,” Women Deliver’s president, Jill Sheffield, said in a a statement.
Crown Princess Mary and Development Minister Mogens Jensen announced Copenhagen’s selection as host city at a press event on Monday at Christiansborg.
“I am proud that Denmark will be hosting the Women Deliver 2016 Conference, and look very much forward to not only welcoming the world’s leading girls’ and women’s health and rights advocates to Copenhagen for this historic event, but also to be participating once again in what is an inspirational, powerful and potentially game-changing forum,” Crown Princess Mary said in a statement.
As many as 5,000 participants from 140 countries are expected to attend Women Deliver 2016.
The conference announcement was made in conjunction with a new strategy framework for gender equality, rights and diversity in Danish development policy.
“If we truly want to have security and prosperity in developing countries, it doesn’t help to exclude whole populations whether it be women, children or sexual minorities. The struggle for human rights is therefore not just about humanism, but also common sense,” Jensen said.
A video about Women Deliver 2016 can be viewed below.