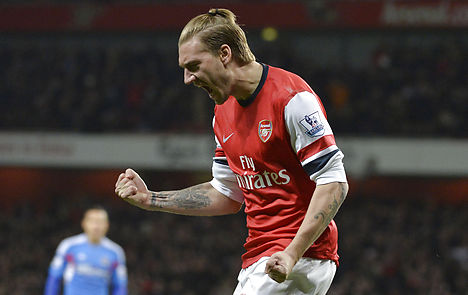 Photo: Toby Melville/Scanpix
The transfer saga surrounding Danish international striker Nicklas Bendtner has come to an end after the former Arsenal player signed a three-year contract with Bundesliga outfit VfL Wolfsburg.
Bendtner has rejected several high-earning offers elsewhere during the summer before settling on Wolfsburg. Reports suggest that his annual salary will exceed 20 million kroner ($3.6 million) whilst turning out for the Volkswagen-owned club.
Wolfsburg finished fifth in last season's Bundesliga and will look to take part in the Europe League as well as trying to emulate or even better last year's Bundesliga placement.
Bendtner bagged 47 goals for Arsenal in 168 appearances but was allowed to become a free agent by the London-based giants, meaning Wolfsburg did not had to pay a transfer fee for his services.