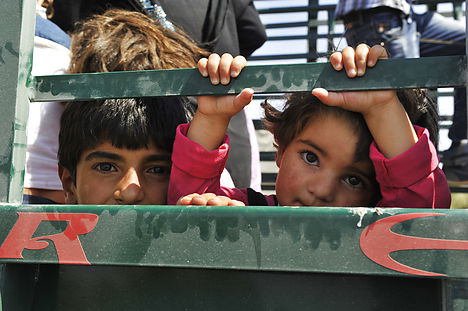 Syrian refugee children sit on a pick-up truck after being evacuated from eastern Lebanon on Monday. Photo: Hassan Abdallah/Scanpix
The Danish People’s Party (DF) wanted them to house foreign criminals, but on Wednesday it was decided that the former military barracks in Sønderborg would be converted into an asylum centre for 300 Syrian refugees.
A majority of the Sønderborg Council voted to use the barracks, which were closed in 2013 as part of defence budget cuts, to help cope with the influx of Syrian refugees.
The DF, Venstre and Conservative members of the council opposed the move, saying the asylum centre would have a negative impact on business development in the southern Jutland town.
“Now the decision has been made so we will have to live with it. But I fear the consequences it will have. There is no doubt that this is one of the darkest days in the council’s history,” Venstre’s Peter Hansen told DR Syd.
Hansen said a revitalization of Sønderborg’s waterfront and plans for a luxury hotel could be jeopardised if investors are scared off by the asylum centre. The future home of 300 Syrian refugees. Photo: Sonny Munk Carlsen/Scanpix
The mayor of Sønderborg, Erik Lauritzen of the Social Democrats, said that everyone in the town should embrace the decision.
“Now that it has been decided that the centre is coming, it is important that all the parties on the council work together to make sure it functions,” he told DR Syd.
Sønderborg Council will rent out the barracks to the Danish Immigration Service (Udlændingestyrelsen) to use as an asylum centre until 2016. At that point, Sønderborg will attempt to purchase it back from Udlændingestyrelsen and determine the building’s permanent fate.
Denmark has been struggling with where to house refugees, forcing many municipalities to turn to temporary solutions like camping trailers and hotels.
Although there are accommodations available in several municipalities, Denmark’s immigration laws stipulate that refugees need to be spread out evenly throughout the country.
Of the 3,889 Danish resident permits granted to refugees in 2013, over a third went to Syrians. The 1,382 Syrians given refugee status in Denmark represented by far the largest single group.