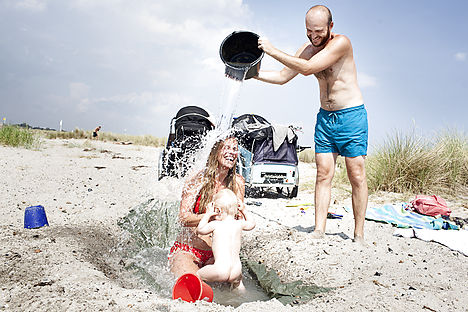 Now that's a way to beat the heat. Photo: Jonas Skovbjerg Fogh/Scanpix
July 2014 is going to go down as one for the weather record books. The month has set one weather record and is very close to setting another.
With over 15 24-hour hour periods in which the temperature did not drop below 25C, July 2014 topped the previous record of 14.9 days set in both 2006 and 1994.
The 19.5C monthly average temperature through the final day of the month is also enough to make July 2014 one of the three warmest Julys since temperature measurements began in 1874. Depending on the final day’s measurements, July 2014 will either end as the second warmest July on record or the third, behind the 19.5C average reached in 1994. The warmest July on record was in 2006 when the average temperature was 19.8C.
This month has also seen unusually long stretches in which the average temperature topped 25C, enough to officially qualify as a heat wave (varmebølge). There was also a five-day stretch between July 22-26 in which the average of the highest registered temperatures as over 28C, which qualifies as a hedebølge.
As reported on Wednesday, the water temperatures in Denmark have also reached new heights this summer, with sea temps measured as high as 27C.