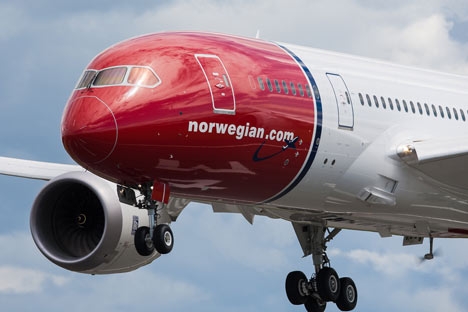 Photo: Norwegian
Norwegian airlines will fly from Copenhagen to Tel Aviv on Monday, its first flight between the Danish capital and the Israeli city since a large number of airline companies halted flights on Tuesday out of security concerns. The airline made the announcement on Saturday evening.
SAS, the only other airline offering direct flights from Copenhagen to Israel’s Ben Gurion Airport, lifted its ban on Thursday.
“The majority of airlines have chosen to resume flights. I’m not aware of any that haven’t. The decision was based upon a conversation between the Norwegian authorities and European airlines,” Norwegian spokesman Julius Støback told Ritzau.
The airline reports that its Monday flights to Tel Aviv from both Copenhagen and Stockholm are fully booked, but flights to and from Tel Aviv are available beginning on Saturday, August 2nd. Norwegian makes three weekly direct flights to Tel Aviv from Copenhagen and Stockholm.
SAS and Norwegian were among a long line of airlines that cancelled flights to Tel Aviv after a rocket landed near Ben Gurion International Airport on Tuesday as part of the ongoing violence between Israel and Hamas. The US Federal Aviation Administration lifted its ban on flying to Tel Aviv during the early morning hours of Thursday.
Officials estimate that more than 1,000 Palestinians and 42 Israelis have been killed in Gaza since the current conflict began on July 8th.