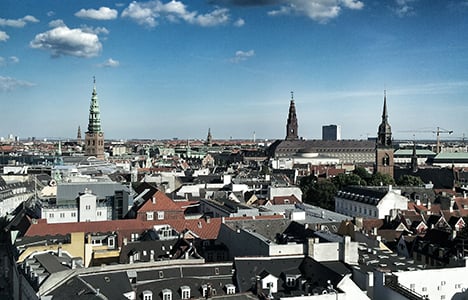 Photo: Michael McKenna
I arrived in Copenhagen on a late flight from Pristina, Kosovo. It was chilly and the streets were clean; people seemed to obey the parking regulations. This, to a Canadian who had just spent two years in the Balkans, was something that reminded me of home, and I began to feel as if Denmark would prove a very familiar place. This was not entirely correct.
In French, the expression “faux amis” (or “false friends”) denotes a pair of words that share their spelling but not their meaning across languages. The French “sensible", for example, does not mean that one is prudent, but rather implies a certain delicacy. In the weeks following my arrival, sitting in my Airbnb apartment in Frederiksberg trying desperately to contact a landlord who would neither rip me off nor ignore me altogether, I began to wonder: Were Denmark and I becoming false friends? Because even though Copenhagen was full of Canada-esque delights like drinkable tap water, traffic laws and supermarkets that were not full of bees, things were beginning to seem a little foreign.
Jaywalking across Borups Alle, people would look at me as if I had disrobed.
As a very new arrival to Copenhagen, I do not yet possess many of the basics of Danish life. I have not received my CPR number, and have never attended a language class. Though I am dimly aware that the spelling of words like “og,” “hyggelig” and “Amager” is a sort of societally-sanctioned practical joke, I cannot yet utter a single phrase beyond “Jeg taler ikke Dansk”. The clerk at my local 7-Eleven has begun asking me when I will begin my Danish courses, and I feel like I have about six weeks left before I am characterised as “the bad kind of foreigner” forever.
In its earliest phases, I think, arriving in Copenhagen produces two linked responses, the first being “what a great city/society” and the second being “they’re never going let me join.” There’s a tension to this. One doesn’t want, walking along Nyhavn or through the Botanical Gardens, to be the bad kind of foreigner; the delights of Copenhagen are such that you begin to crave acceptance, and each tiny new thing (“herring is an entirely acceptable sandwich ingredient!”) becomes a milestone on your road to such. Unfortunately, between the milestones there are speedbumps, and in some places it seems like the road has been washed out altogether.
“If you were Danish, you wouldn’t have to worry about this,” my estate agent said as we drove along Jagtvej in the rain. “In fact, your neighbour will probably have the same apartment as you do, but he will pay half the rent!” As an advertisement of his services, it was admirable for its honesty, but the circumstance got under my skin. Canadians, I think, imagine Denmark as a social democracy that actually works, as one whose state-controlled network of supports and procedures actually does something beyond pissing everybody off. As such, and with no real foundation to my beliefs, I imagined that the Copenhagen housing market would be a well-supervised and equitable thing. “For Danes, it is!” exulted the agent, and I believed him. But I am not any sort of Dane as of yet. For us outsiders, the Copenhagen rental market resembles a losing game of Monopoly, the kind where your friends have hotels everywhere and you’re afraid to roll the dice.
I now live in Østerbro, where I am being gloriously swindled for a tiny flat near Bopa Plads; instead of being upset, I am merely grateful that the agent actually called me back. Most didn’t. Perhaps “Stockholm syndrome” should be renamed?
It is difficult to be upset in the Copenhagen of mid-July. Though I have not yet obtained my residency permit, I have purchased a bicycle and been invited to two Danish homes, which locals assure me is something to be pleased about (admittedly, the Danes in question were either married to or living with non-Danes, but for the moment I am going to insist that this still counts). Though all societies have barriers to entry, not all societies motivate one to surmount them to the same degree (I could tell you about the unpleasantness that left Istanbul firmly categorised as a “vacation-only” city, but we’d kind of be straying off-topic).
If the reflections I have written here seem naïve or wrongheaded, rest assured that the coming months will lay all that bare. From this point, I am aware, the days are only getting shorter, and soon my new home will be a far darker and greyer place than it presently is. Do candles really make that much of a difference? Does speaking Danish? Vi vil se.*
* This may not be correct usage, but at least I can pronounce it… I think.
Montreal native Michael McKenna recently relocated to Copenhagen after two years in Kosovo. He has written for Vice, AskMen and Business Insider, among others. He will be chronicling his transition to Copenhagen for The Local.