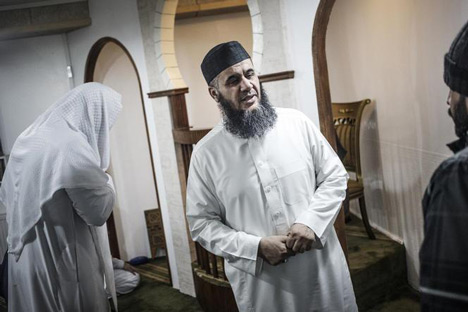 Abu Bilal Ismail's comments about Jews may have serious repercussions. Photo: Casper Dalhoff/Polfoto
Speaking at the Al Nusra mosque in Berlin on July 18th, Aba Bilal Ismail was caught on video calling for the death of Jews (see it below).
“Oh Allah, destroy the Zionist Jews. They are no challenge for you. Count them and kill them to the very last one. Don’t spare a single one of them. Oh Lord, bring torment upon them,” Ismail said.
East Jutland Police  are now reviewing the remarks to determine if Ismail has violated any laws.
“We are going to evaluate where things stand and see if there is a direct violation. We’re getting started on it now,” police spokesman Jan Andersen told Politiken on Wednesday, adding that their first step is to get a verified translation of his remarks.
If Ismail is found to have violated Danish law, it may have serious consequences both for himself and the troubled Aarhus mosque Grimhøjmoskeen.
Aarhus city council member Knud Mathiesen of the Danish People’s Party said the mosque should be shut down.
“I think we need to take action and close Grimhøjmoskeen. If anyone still thinks that the imams there contribute positively to integration, this proves the exact opposite,” he told Jyllands-Posten.
Grimhøjmoskeen has long been in the media and political spotlight as a potential source of radicalisation. Police say that 22 young men who belong to the mosque have travelled to Syria to fight in that country’s civil war.
Fellow city council member Peder Udengaard also condemned the imam’s remarks, but didn’t go as far as his colleague.
“It is mediaeval, and a type of rhetoric that is very hard to believe comes from our own backyard,” he told Jyllands-Posten. “But as long as he hasn’t violated any laws, what we can do is very limited. Freedom of speech is still a value that is very important for us here in Denmark and throughout the West.”
Venstre’s political spokeswoman Inger Støjberg thinks Ismail should be kicked out of Denmark.
“It’s my opinion that Abu Bilal Ismail brings shame to Islam by using his faith to carry out the completely warped battle he is waging against Western values,” she told Berlingske Nyhedsbureau.
“We need to determine whether his remarks were legal, and I don’t think they were. He should be punished for his statements and then we should investigate his basis for residence in Denmark. If he can be thrown out of the country, I think he should pack his bags because he does not belong here,” Støjberg said.
Ismail has attempted to clarify his remarks.
“I don’t mean that all Jews should die,” he told BT. “Only those Jews who have killed people in Gaza. I prayed for God to destroy those Jews who kill us. It’s not all Jews, because I know Jews who are good toward us."