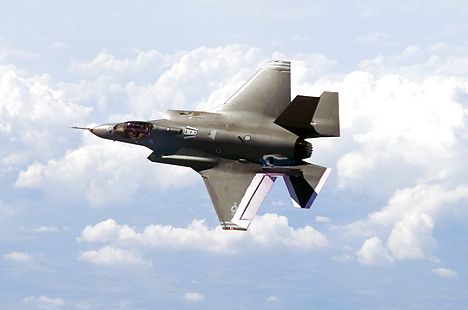 An F-35 fighter jet. Photo: AFP PHOTO/JSF/Scanpix
Three candidates are officially in the running to receive one of Denmark’s biggest public purchases of all time when the military purchases new fighter jets by July 1st, 2015.
On Monday the bidding period to provide Denmark with new fighter jets expired, giving politicians just under a year to decide who will get the multi-billion kroner contract.
The Danish military is prepared to spend roughly 30 billion kroner ($5.4 billion) to replace its fleet of F-16 jets.
“We need new planes because our current combat jets date back to the 1970s and they have flown too many hours,” Andreas Krog, a journalist that has been covering the looming fighter jet purchase since 2008, told Danmarks Radio.
It was expected that four producers would provide bids for the contract, but the Swedish government and weapons producer Saab decided at the last moment to not bid for the contract.
“We have… after internal deliberations also including our industry, concluded that we choose not to answer your request for binding information,” Ulf Hammarström of the Swedish Defence and Security Export Agency wrote to the Danish defence ministry.
According to Politiken, the Swedes think that Denmark has already decided to purchase F-35 jets from the US weapons producer Lockheed Martin.
The F-35s, also called Joint Strike Fighters, are also deemed by Krog to be the clear favourite.
“Many signs point to the decision falling on the Joint Strike Fighter because they are the newest jets, and the US itself has also invested in them,” he told DR.
But that choice would not be without its risks. Earlier this month, the US's fleet of F-35 fighter jets were grounded due to the risk of engine fire. On July 15th, the Pentagon gave the aircraft “limited flight clearance” requiring an engine inspection regimen.
The other two contenders for the 30 billion kroner contract are the Eurofighter Typhoon from German producers Cassidan and the F/A-18F Super Hornet produced by the American firm Boeing.
“The choice is between the chic and super modern, but more risky solution, or the more secure solution with planes that are a bit older and could be on their way out of production,” Krog said.
When the ultimate decision is made, Krog said it will be just as much about international politics as it is about price and technology.
“[Denmark] will look at which jets are used by the countries we normally consider allies,” he said.
There too, the Joint Strike Fighter looks likely to come out on top. In addition to the US military, the militaries of Norway, the Netherlands, Israel, the UK, Italy, Australia, Korea and Japan have also purchased the F-35s.
The Eurofighter Typhoon has been purchased by Germany, Italy, the UK, Austria, Spain and Saudi Arabia, while the US Navy and Australia have purchased the Super Hornet.
The new fighter jets will be expected to last 40 years.
Note: This story was updated at 3.23pm after the defence ministry confirmed that the Swedes had opted not to continue in the bidding process