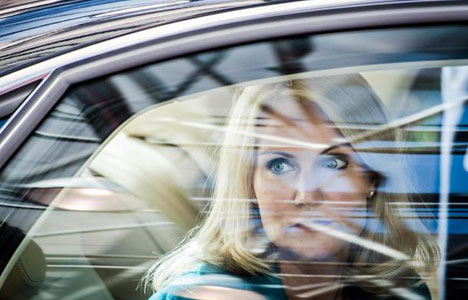 Helle Thorning-Schmidt arrives in Brussels on Wednesday. Photo: POLFOTO
Helle Thorning-Schmidt arrived in Brussels on Wednesday with a long night ahead of her. The question is, will it be her final night as Denmark’s prime minister?
Thorning-Schmidt's first order of business on Wednesday was a meeting with the newly-appointed EU Commission President Jean-Claude Juncker.
Her day in Brussels got underway amid widespread speculation that she will receive the nod to replace Herman Van Rompuy as the president of the European Council, which represents the bloc's 28 political leaders and sets overall policy direction.
Thorning-Schmidt enjoys wide support, including from Britain, to replace the discreet but effective Van Rompuy.
Denmark however is not a member of the eurozone, which counts against her. But diplomatic sources say this would not matter so much if the summit decides to name a permanent head of the Eurogroup.
SEE ALSO: Thorning EU rumours reignited by endorsement
That post is widely tipped to go to Spain's Luis de Guindos, who would who have to quit as finance minister if European leaders decide to make the Eurogroup job a full-time one.
If Thorning-Schmidt misses out on the Council, other possibilities are conservatives Irish Premier Enda Kenny and former Latvian prime minister Valdis Dombrovskis, while Estonian leader Andrus Ansip, who stepped down earlier this year or Dutch Premier Mark Rutte would suit the centrist Liberals.
Diplomatic sources said the discussions are likely to be intense, setting the stage for the next step in the process — who gets which portfolio in the new 28-seat Commission to be headed by Juncker.
A more immediate item on the Wednesday agenda is determining who will replace Britain's Catherine Ashton at the European External Action Service.
Ashton has played a major role in many of the top international issues, from the Middle East, to Iran nuclear talks and the Ukraine crisis.
Another woman, Italian Foreign Minister Federica Mogherini, is the favourite to replace her.
But Mogherini is relatively inexperienced and some states, notably the Baltic countries and Poland, feel Rome has been much too soft on Russia over Ukraine.
SEE ALSO: Will EU give Mogherini top foreign affairs job?
An alternative would be current EU Humanitarian Aid Commissioner Kristalina Georgieva of Bulgaria who is close to the centre-right European People's Party, the biggest single group in the European Parliament to which Juncker also belongs.
While all Danish eyes will be on Thorning-Schmidt, it’s also possible that EU leaders on Wednesday will opt to delay the decision to replace Van Rompuy until the autumn. The Belgian’s term as the European Council president does not expire until November.