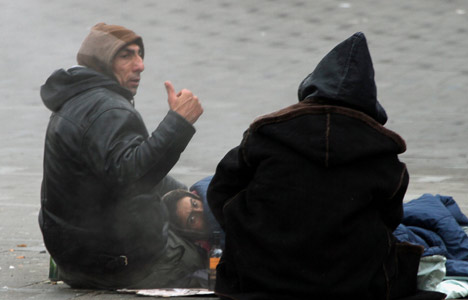 Swedish politicians attacked Trine Bramsen's comments as "cynical". Photo: Colourbox
Trine Bramsen, a spokeswoman for the governing Social Democrats, sparked controversy earlier this week when she suggested that beggars should abandon Denmark and head for its Scandinavian cousin instead.
"We don't want to make Denmark a hotel with a reputation across Europe for free food and board," Bramsen told Swedish Radio.
Across the Øresund Bridge in Malmö, where the number of beggars has increased significantly over the past year, mayor Katrin Stjernfeldt Jammeh slammed the Danish proposal.
"I don't think the EU migrants who have come to Denmark see the country as a hotel," Stjernfeldt Jammeh told the Sydsvenskan newspaper.
Bramsen claimed that beggars would get a better deal in Sweden. The Danish government intends to clamp down on the number of homeless people sleeping in the parks in Copenhagen over the summer.
"We firmly believe there should be a ban against begging, a ban against spending the night in people's backyards. That way they will choose another country, for example Sweden, where they know they have better possibilities," said Jamsen.
The Malmö mayor wasn't impressed with Bramsen's rhetoric.
"I think it's a cynical game. If it is Denmark's ambition to not put up with it but to get people to look at other countries, then it is clear we will have an increase in the number of migrants in Malmö," she said.
Meanwhile the spokesperson for immigration for the Christian Democrats (Kristdemokraterna, KD), Emma Henriksson, told Swedish Radio that any such move by Denmark would "attack the most vulnerable."
Fredrick Federley, politician with the Centre Party (Centerpartiet), agreed.
"I get very upset, I don't think it's okay to attack other EU citizens in this way."
Malmö mayor Stjernfeldt Jammeh added that the local government has a close relationship with their counterparts in Copenhagen and that they would be discussing the matter further.