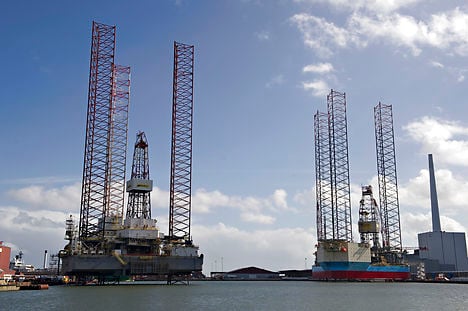 Brazilian operations prove a disappointment for Maersk. Photo: Claus Fisker/Scanpix
Danish shipping and oil conglomerate A.P. Moeller-Maersk said on Tuesday its Brazilian oil and gas business will take a $1.7 billion (9.3 billion kroner) writedown over disappointing drilling results and low oil prices.
The book value of three Brazilian blocks Maersk bought in 2011 from South Korea's SK Energy for $2.4 billion has been written down to $600 million, it said.
Another $100 million was written down over items including the divestment of a small oil field.
"Appraisal drillings performed have come out at the low end of the original expectations and additional adverse impacts from increased development costs and lower oil price also must be expected," it said.
The Copenhagen-based group however left its underlying profit forecast for the full year at $4.0 billion.
"The SK Energy investment was made at a time when the outlook for the oil industry and oil prices were more positive than today," chief executive Nils S. Andersen said in a statement.
Consequently, the company said Maersk oil would no longer seek to grow or operate the three Brazilian blocks.
The writedown will have no impact on Maersk Oil's long term production plans "since no volumes concerning the Brazilian assets have been included in these plans," it said.
In the short term, it would instead lead to lower than planned exploration spending, Maersk Oil chief executive Jakob Thomasen said.