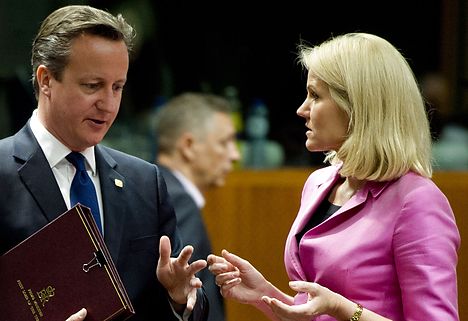 David Cameron is rumoured to favour the appointment of Helle Thorning-Schmidt as European Council president. Photo: Alain Jocard/Scanpix
As European leaders gathered in Brussels on Friday, Prime Minister Helle Thorning-Schmidt tried to downplay the possibility of a damaging row over Jean-Claude Juncker's likely nomination as European Commission president which has left Britain isolated and angry.
"I believe that Jean-Claude Juncker is an experienced politician who has worked pragmatically for the European Union for many many years," Thorning-Schmidt said. "I think what we need to focus in on right now is the strategic priorities for the union. This is the first time in a very long time where we have had a discussion about what we should be doing in the EU and in my opinion that is much more important than who should be doing it."
Although Juncker's appointment is expected to be confirmed at the summit, Prime Minister David Cameron will force an unprecedented vote on the issue, playing out in the public eye a major disagreement about the EU's future. The British leader remained bitterly defiant as he arrived for the talks, insisting Juncker was "the wrong person" for the job.
"I know the odds are stacked against me, but it doesn't mean you change your mind," Cameron added, knowing that all of the other 27 EU member states would vote for Juncker apart from Hungary.
Leaders are expected to try and appease Cameron, potentially by offering London a top job in Brussels, but the dispute threatens to fuel eurosceptic sentiment in Britain before a referendum on leaving the EU slated for 2017.
Despite the stand by Britain, leaders are clearly expecting to be able to announce their choice of Juncker on Friday.
But Cameron could "retaliate" against Juncker's nomination by refusing to sign the conclusions, according to the EU Observer website.
The disagreement comes a month after anti-EU parties made sweeping gains in European elections, with outright victories for the UK Independence Party in Britain, the Danish People's Party in Denmark and the National Front in France.
German Chancellor Angela Merkel, Europe's most powerful leader, on Thursday urged EU colleagues to "compromise" with Britain to defuse tensions.
"I think we can find compromises here and make a step towards Great Britain," she said. "I repeatedly spoke of a European spirit which is needed and which will help us to find good solutions."
She spoke before EU leaders gathered in the Belgian town of Ypres, among World War I's bloodiest battlefields, to mark 100 years since the conflict started.
'Europe needs Britain'
Other European leaders seemed to be heeding Merkel's advice as they arrived for the summit Friday.
"Europe needs Britain to be part of us," Thorning-Schmidt told reporters. "I hope that after today that we can get back on track."
Analysts say that Cameron's resistance to Juncker could pay off for Thorning-Schmidt, as a potential compromise could include naming the Danish PM as successor to Herman Van Rompuy as European Council president.
Thorning-Schmidt — who has repeatedly downplayed suggestions that she is in the running for a top EU post — is thought to be favoured by Britain but not France.
Away from disagreements over top jobs, European leaders also discussed the conflict playing out on their doorsteps in Ukraine.
Ukraine, Georgia and Moldova signed landmark association and free trade accords with the EU at the summit. The pact, inked by Ukraine's new President Petro Poroshenko, has been at the heart of a months-long crisis in Ukraine and is fiercely opposed by Russia.