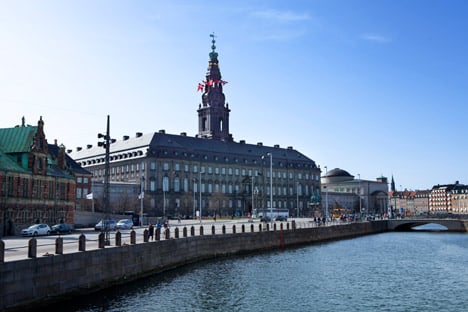 Christiansborg's tower is the highest in Copenhagen. Visitors can now climb the tower for never before seen views. Photo: Anders Hviid
Copenhagen is a city of towers. From the Round Tower to the spire of Our Church of the Saviour (Vor Frelsers Kirke), there are plenty of places from which to get a bird’s eye view of the city.
But until recently, what is perhaps Copenhagen’s most iconic tower of all has been inaccessible to the public. The parliament building, Christiansborg Palace, features the city’s highest tower and now for the first time ever the tower has been opened to residents and visitors.
GALLERY: See our slideshow of Copenhagen's newest tourist attraction
Located on the island of Slotsholmen in the heart of the city, Christiansborg is the titular building in the popular TV drama Borgen. In addition to acting as the fictional workplace for Birgitte Nyborg, Christiansborg is the place where Denmark’s 179 members of parliament draft and pass laws to govern the country.
The building has a rich history that dates back to 1167 when the first castle was built on Slotsholmen. The remains of the original Bishop Absalon's Castle can still be found in Christiansborg's basement. The proceeding centuries saw the castle get torn down twice, rebuilt again and then levelled by not one but two fires, the most recent of which was in 1884. In 1918, the present neo-baroque Christiansborg Palace was erected.
The newly-opened tower includes a restaurant operated by chef Rasmus Bo Bojesen. While the restaurant is reserved for paying customers, it is completely free of charge to take in the view from the tower.
Always eager to see our city from a new viewpoint, The Local recently journeyed to the top to take a look.