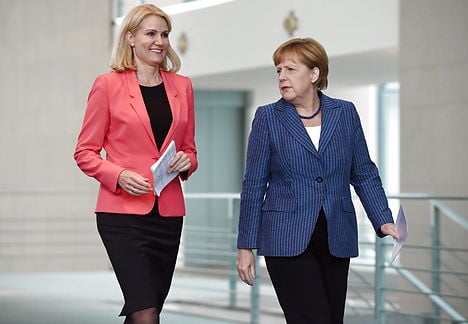 Both Thorning-Schmidt and Merkel denied that the Danish PM was being considered for a top EU job. Photo: Tim Brakemeier/Scanpix
PM Helle Thorning-Schmidt’s lunch and joint press conference with German Chancellor Angela Merkel in Berlin gave rise once again to rumours that Thorning-Schmidt is in the running for a top EU job.
But at the press conference, both women deflected speculations and downplayed the notion that the lunch served as a ‘job interview’ for Thorning-Schmidt.
“The Danish prime minister is a fantastic prime minister and I’ve got the impression that she really enjoys her work back home,” Merkel said.
Thorning-Schmidt herself has repeatedly insisted that she is not interested in a top EU post, telling BT last week that the constant speculation is “inconvenient” and “disturbs [her] work”. Nevertheless, the Danish and international press have been rife with rumours, with most commentators saying she is a likely fit for either European Commission president or head of the European Council.
When asked today if she could see Thorning-Schmidt in either of those positions, Merkel said that Germany was prepared to back former Luxembourg PM Jean-Claude Juncker for Commission president, but gave no indications of who she might support to replace Herman Van Rompuy as European Council president. Merkel did say however that Denmark’s status as a non-euro country would not eliminate Thorning-Schmidt from consideration.
"It can't be the case, in the sense of the unity of the European Union, that only someone who is in the eurozone can be Council President. There is no such rule," Merkel said. “That has nothing to do with Denmark in particular – it's just a general statement.”
Reporters at the press conference seemed pressed for details about what the two leaders discussed when they were spotted speaking one-one-one for a few moments on the balcony.
To the assembled corps’ disappointment, Merkel said they talked mostly about the view over Berlin.