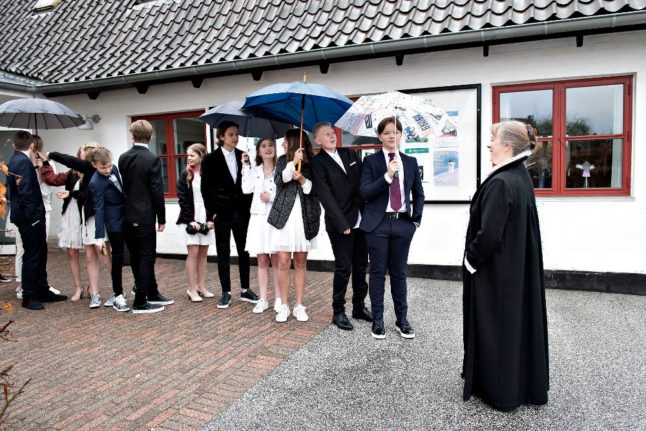 Danish teenagers attend their confirmations back in 2017. The country's association for priests says scrapping the Great Prayer Day holiday could ruin plans for the tradition in upcoming years. Photo: Jens Nørgaard Larsen/Ritzau Scanpix

In a decision which seems unlikely to be popular amongst the general public, the new government proposes removing a public holiday from the national calendar as part of its policy agreement, which was presented on Wednesday.

The holiday, Great Prayer Day (Store Bededag) has existed since the 1600s and falls on the fourth Sunday after Easter, giving everyone who works in Denmark an additional long spring weekend.

It is also the weekend on which many young Danes attend their traditional confirmation ceremonies.

The new government says it wants to use money saved by scrapping the holiday to increase spending on defence.

The announcement has elicited what is possibly the first instance of far left- and right-wing parties both opposing a policy of the centrist coalition.

The leader of the far-right Nye Borgerlige party, Pernille Vermund, threatened to use a clause in the Danish Constitution to activate a referendum over the issue.

In a tweet, Vermund wrote that her party would use the Constitution if “the government wants to abolish Great Prayer Day, which for many of us Danes is associated with important traditions”.

“So normal, hard-working Danes must pay with their well-earned holiday so that those who have the most can get top bracket tax cuts and company tax cuts,” Villadsen tweeted in regard to the proposal before it was officially announced.

By abolishing the holiday, the new government is neglecting the needs of the Church of Denmark and young people who attend their confirmation ceremonies around the time of Great Prayer Day, the Danish Association of Priests (Præsteforeningen) said in comments to news wire Ritzau.

“It’s a big day for confirmations – and will be in 2024 and 2025 because it’s planned a year in advance. There are a lot of priests who will have to restructure their plans,” the association’s chairperson Pernille Vigsø Bagge told Ritzau.

“People book restaurants, catering companies, tents and equipment up to five years in advance,” she said.