Motorists preparing to drive on Wednesday afternoon should prepare for snow or sleet with conditions around freezing, the Danish Met office DMI said.

DMI issued early on Wednesday a warning for heavy snow in much of northern and eastern Jutland, the Great Belt Bridge region and western and northern Zealand.

In a later update on Wednesday, the warning was limited to areas of Zealand.

“The most important thing is to prepare your car for these winter journeys. That means removing all the snow from windscreens and making sure windows are demisted, so you can see properly,” Søren W. Rasmussen, auto editor with motorists’ organisation FDM’s magazine Motor, told news wire Ritzau.

‘Heavy’ snowfall as alerted by DMI means that over 15 centimetres of snow falls within a six-hour period.

Air temperature will be around freezing, meaning much of the snow could take the form of sleet. Ground temperature is also relatively high, meaning snow has less chance of taking on the ground.

The Danish Roads Directorate (Vejdirektoratet) said it was prepared to salt roads in advance of forecast snow in affected areas.

“When snowfall is imminent we do a salting ahead of the snow, so the salt works on the snow in the first instance,” operations manager Carina Meldgaard Frandsen told news wire Ritzau.

The roads authority also has the option of using snow plows where necessary.

Despite this, snow will increase the likelihood of slippery and hazardous roads on Wednesday afternoon. Rasmussen advised motorists to keep a greater distance than usual in traffic and to reduce speeds.

“It’s simply related to snow and ice on the road meaning that friction is reduced and you therefore need a longer distance to brake,” he said.

Most areas will receive between two and eight centimetres of snow according to DMI. Local areas may see heavier coatings.

READ ALSO: Driving in Denmark: When should you change to winter tyres? 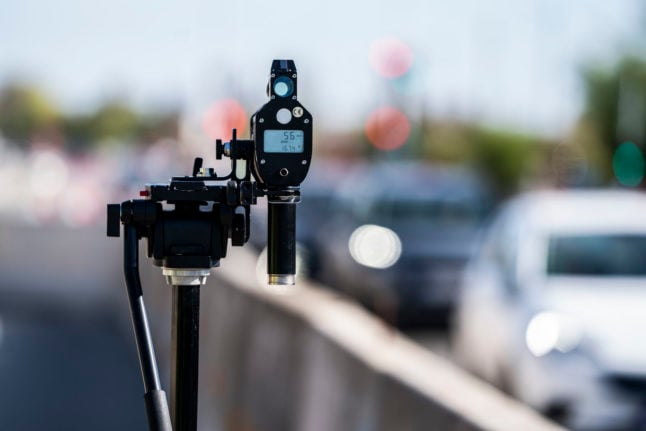 A message appeared in the app confirming that it will no longer work from next month, media Avisen Danmark reported.

Fartkontrol.nu warns users about speed checks as well as accidents and other traffic disruptions on Danish roads.

Users of the app submit reports of speed checks, accidents or queues to the app, which other users are then able to see. The app is free to use.

According to its website, the app has over 300,000 active users in Denmark.

It is legal to use but several politicians have previously criticised it and other similar apps, accusing it of being immoral.

WEATHER
Get ready for a wet and windy end to 2022
Url copied to clipboard!