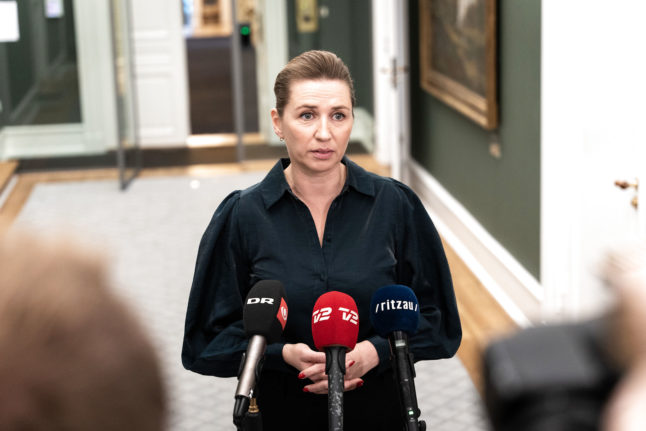 Mette Frederiksen talks to press at the Danish parliament, Christiansborg, ahead of the latest round of talks aimed at forming a new government. Photo: Emil Helms/Ritzau Scanpix

Frederiksen, whose government is performing a caretaker role after last week’s election, is leading negotiations to form a new government.

Her Social Democratic party won a 27 percent share of the vote and remains the largest party in the Danish parliament.

The ‘red bloc’ of left-wing parties won a slender majority of a single seat at the election.

Frederiksen has pledged to attempt to form a centrist coalition government including parties from both the right and left wings.

“I’ve been nominated [to lead negotiations] and will do all I can to form a government,” she said on Thursday.

READ ALSO: Danish election: What happens next after narrow win for left bloc?

“But it will take as long as it takes. These are parties that don’t usually sit at the same table when we are talking about forming governments. It’s not something you can just do from one day to the next,” she said.

The environmentalist Alternative party was first to engage in talks with Frederiksen and other Social Democratic representatives on Thursday.

Alternative favours a “red-green” government which would comprise solely of ‘red bloc’ or left-wing parties, making use of the parliamentary majority secured in the election and more in keeping with the established ‘bloc’ system of alliances between parties.

Talks are now taking place at government offices in Copenhagen after initially being held at Marienborg, the PM’s official residence.

While earlier rounds of talks focused on health policy, focus has now switched to the economy including how ongoing inflation should be responded to.

Several parties have called for parliament to agree on a new aid package for households affected by high prices as soon as possible, concurrent to the negotiations over the government which could become protracted.