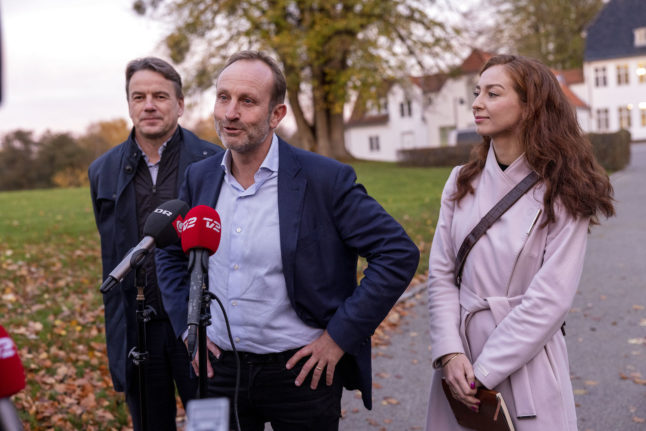 While most parties have kept a tactical discretion on exactly how they would prefer a potential coalition to look, the Social Liberals have laid their cards on the table.

The socially progressive and economically liberal party changed its leader last week after a poor election result, but could nevertheless play a key role in talks to form the government, given its position near the political centre.

The parties best suited to form government in the view of the Social Liberals are those who agreed on the “national compromise” political agreement from March this year.

The national compromise was agreed between four parties and the government to secure extra defence spending following the Russian invasion of Ukraine. It also paved the way for the June 1st national referendum in which Danes voted to scrap the country’s EU defence opt-out.

The parties who signed the agreement were the governing Social Democrats along with the Social Liberals and fellow ‘red bloc’ party Socialist People’s Party (SF), as well as the ‘blue bloc’ Liberal (Venstre) and Conservative parties.

“I think it’s both possible and realistic. But let’s be honest and say that this is new territory for all of us,” new Social Liberal leader Martin Lidegaard said.

Lidegaard confirmed he wanted all of these parties to be government parties, as opposed to a government composed of fewer parties but with the parliamentary backing of the others.

Notably, the list of parties does not include the Moderates, a newly-formed centrist party led by former PM Lars Løkke Rasmussen which ran for election on the basis of forming a central coalition.

The Social Liberal opposition to the (caretaker) government’s plan to open an asylum facility in Rwanda has been noted as a major stumbling block in talks.

Prior to the election the Social Liberals refused to back any government that supported, or continued to look into the viability of the plan.

Lidegaard appeared to soften that stance, however, in comments reported by news wire Ritzau.

“We are going into things with an open mind. Anything is possible,” he said.

The Social Liberals earlier said they could accept a form of the plan if it was developed as a joint European project.