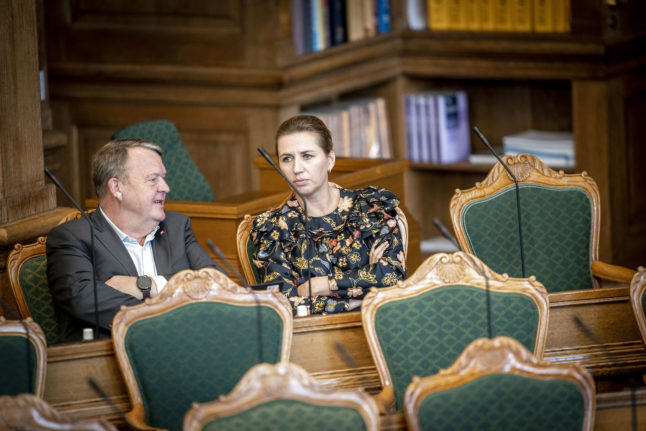 In Friday’s poll, conducted by Voxmeter on behalf of news wire Ritzau, the ‘red bloc’ has 88 of the 179 seats in Danish parliament. The opposing ‘blue bloc’ has 81 seats.

The Moderate party, which does not have stated allegiance to either bloc, would gain six seats according to the poll.

The remaining seats are shared between four representatives from the Faroe Islands and Greenland.

The poll is based on a survey of 1,094 representative Danish voters and carries a statistical uncertainty of 3 percent.

Prime Minister Mette Frederiksen’s Social Democratic party have a strong position in the polls. The governing party remains the largest in parliament on 27.5 percentage points.

The Liberal (Venstre) party has 14.6 points and the Conservative party 11.4 points. Both parties are in the ‘blue bloc’ which would oust Frederiksen as PM if it won a majority.

Outside of the three largest parties, the government’s centre-left ally SF is on 8.3 percent with the newly-formed right wing group Denmark Democrats on 7.9 percent.

The latter party is led by ex-immigration minister Inger Støjberg, who was expelled from parliament late last year after a guilty verdict in a special impeachment court. Støjberg will almost certainly regain her seat at the election.

Her party also counts several former members of the Danish People’s Party (DF) among its representatives after internal power struggles within DF resulted in some of its MPs switching to the newly-formed group.

DF, an anti-immigration party which was a hugely influential player in Danish politics in the 2000s and 2010s, is now in danger of dropping out of parliament altogether according to the new poll.

The poll places DF on 1.7 points, under the 2 percent threshold for parliamentary representation. The party was backed by 21.1 percent of voters at the 2015 election and 8.7 percent in 2019.

Three other parties – the Christian Democrats and two green parties, Alternative and the Independent Greens – also fail to make the threshold in the poll.

The Social Liberal (Radikale Venstre) party – whose threats to move for a vote of no confidence in the government elicited the early election – could be set to lose influence, with 5.4 points in the poll compared to 8.6 points in 2019.

However, the next government could break with Denmark’s traditional ‘bloc’ factions, with both the Social Liberals and Moderates in favour of a centre coalition and Frederiksen also having stated she wants to form a government across the centre.

The two biggest right wing parties, the Liberals and Conservatives, have both rejected working with Frederiksen’s Social Democrats in government.