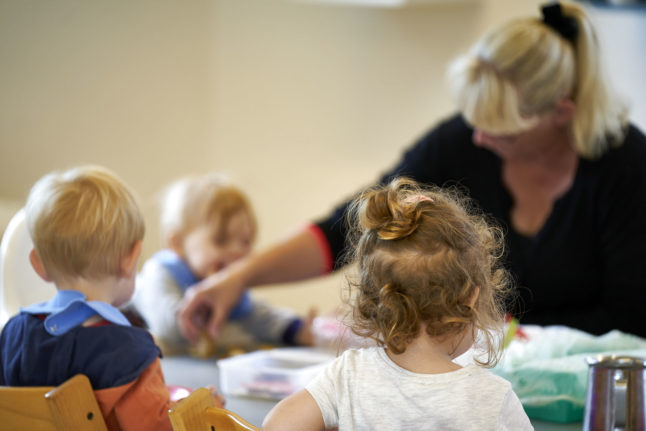 In Denmark, the state pays 75% of the costs of childcare. Photo: Signe Goldmann/Ritzau Scanpix

In Denmark, every child is guaranteed a place at a public childcare facility from the age of six months. The government pays 75 percent of the cost of a place or even more if your household income is below a certain threshold.

If you have more than one child using childcare, you pay full price for the most expensive daycare and half-price for the others.

Some municipalities (kommuner) pay you money if you choose to look after your own child at home after maternity leave.

Parents in Denmark can also receive child and youth benefits (børne- og ungeydelsen), also known as børnepenge. This is a tax-free payment that you receive for each of your children until they reach the age of 18.

READ ALSO: What benefits are you entitled to if you have children in Denmark?

The cost of nursery and kindergarten is capped at 3,050 Norwegian kroner, regardless of the hours attended or whether that facility is state-run or private. This means you’ll never pay more than roughly €295 a month per child in childcare costs.

Generally, the highest amount parents have to pay for a full-time place in childcare is 1,572 SEK a month, which is around €145. The exact amount is calculated on income. It is half price if you have more than one child in childcare.

The costs for daycare centres (Kindertagesstätte, or Kita for short) can differ greatly depending on where you live in Germany, as the fees are set by the local government.

In Schleswig-Holstein in the far north, parents pay on average nine percent of their after-tax income on childcare costs. In Hamburg, 4.4 percent of parent’s income goes on childcare as every child in entitled to five hours of free care a day. In Berlin, daycare is completely free.

Costs can vary depending on whether it is a  private or public guardería or centro infantil (as nurseries are called in Spanish).

Public ones are heavily subsidised by the government and cost around €100-260 per month, depending on where you live in Spain and your situation. Private nurseries cost between €150 and €580 per month. There is also a fixed yearly fee called a matrícula or enrolment fee, which is around €100.

There is a 50 percent discount for large families and single parents don’t have to pay anything for childcare.

There’s also a deduction of up to €1,000 (cheque guardería) that is applied to the income tax return and works out at around €100 to €160 per month which is aimed at working mothers and is available up until the child is three years old.

In France, crèches tend to be the most affordable option and the cost is based on the family’s income. High earners might pay up to a maximum of €4.20 an hour (€33.60 for an 8-hour day), whereas low-income families might pay €0.26 an hour (€2.08 for an 8-hour day) at a crèche collective, which is for three months to three year olds. At the age of three, compulsory education begins in France.

The cost of a childminder is around €10.88 an hour and up to 50 percent of the costs of a nanny or professional childminder can be reimbursed by the government.

The OECD calculations on the percentage of income spent on childcare – based on two parents both working full time – is 13 percent in France. This is roughly similar to Spain and Italy.

Public nurseries and kindergartens are heavily subsidised and in some cases free, depending on where you live. For example in Vienna, parents only need to pay €72.33 a month to cover meal costs, with low income families being exempt from that fee.
Vienna also subsidises private kindergartens, paying up to €635.44 a month directly to the institution.
In other provinces, kindergarten is free for part-time hours. It is mandatory for all children in Austria to attend part-time kindergarten from the age of five. They start school aged six.

The average Swiss family spends a massive 41 percent of their net income on childcare, three times the OECD average of 13 percent.

According to charity Coram in their Childcare Survey 2022, the average cost of full-time nursery is £1,166 (around €1,304 a month), which is even higher in some parts of London. There are some government subsidies available for low-income families and those receiving benefits and every parent is entitled to 15 or 30 free hours of childcare the term after their child turns three years old.

The cost of childcare varies within each country, depending on family circumstances. However, for guaranteed low childcare costs for every parent, Sweden comes out best, with a maximum of €145 a month. 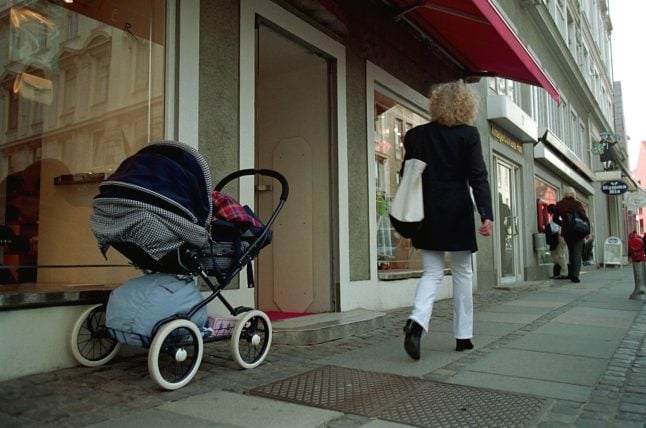 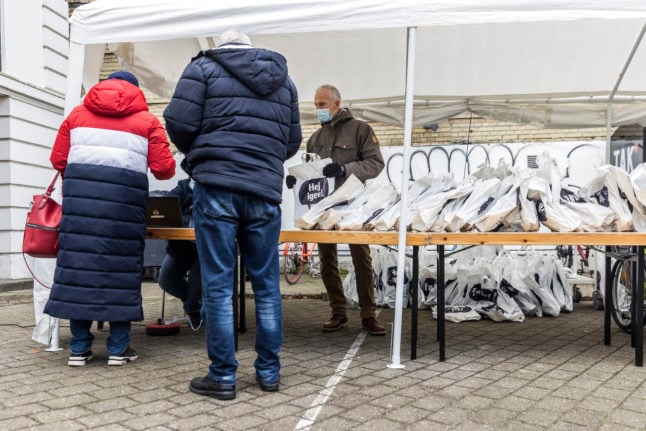 Denmark trended on social media this week when a Tiktok post, later also shared on Twitter, showed a series of videos of Danish strollers or prams parked outside on streets.

A number of the clips in the video show empty strollers parked outside kindergartens, but others presumably do indeed have sleeping babies in them.

This should not come as a surprise, given it’s common practice in Denmark to put babies and toddlers down for their naps outdoors, usually in their strollers.

Some social media commenters expressed shock at the video, with a fair few calling it bad parenting.

This is so interesting! Imagine just leaving your kid outside to nap while you go about your business, unbothered. Wow. pic.twitter.com/Ehqg32Mjoj

This week’s Tiktok and Twitter posts are not the first time Danish babies napping outside has caught international attention.

Back in 2013, newspaper Jyllands-Posten reported that the “BBC is surprised that Scandinavian children sleep outside” in response to an article by the British broadcaster titled “The babies who nap in sub-zero temperatures”.

“The Scandinavian custom of letting infants sleep outside is causing a stir,” the paper wrote.

Research cited in both the British and Danish articles suggests that there may be benefits to letting children sleep outdoors.

That includes a study from Oulo University in Finland based on a survey of parents.

“Probably the restriction of movements by clothing could increase the length of sleep, and a cold environment makes swaddling possible without overheating,” Tourula said.

“In some studies they found pre-schoolers who spent many hours outside generally – not just for naps – took fewer days off than those who spent most of their time indoors,” she said, adding “in other studies there wasn’t a difference”.

District nurse and author Helen Lyng Hansen told newspaper Ekstra Bladet in 2013 that babies sleeping outside “is a tradition we have in Denmark.”

“It’s part of our culture that we have an idea that it is good for children to sleep outside and get fresh, red cheeks. But there’s no evidence to say that it makes children healthier,” she said.

A page on district nursing advice website Sundhedsplejerkse.dk says that “there are not yet any scientific studies that can prove that sleeping outdoors makes a difference. But the experiences of parents and experts suggests that children seem to sleep well outside.”

All experts stress that it is important for babies and small children to be appropriately dressed for sleeping outside.

Newborn infants are not put outside to sleep, with most parents waiting until around five to six weeks of age, particularly in colder seasons. Health service advice says infants weighing under 3 kilograms should sleep indoors. Children who have a fever or are otherwise sick should also not sleep outside, according to general advice.

Temperatures below minus 10 degrees Celsius or very misty conditions are not suitable for outside sleeping and naps outside should not last more than around 2 hours.

In Denmark, the standard outfit for children sleeping outside in winter is a woollen sovedragt or full-length suit on top of up to three layers of their regular clothes or pyjamas. They will also wear gloves, a scarf and an elefanthue or non-face-covering balaclava.

A design of blanket from the brand Voksi, referred to as a Voksi pose (“Voksi bag”) is the most popular choice for outdoors sleeping. The blanket can be folded and fastened to enclose the baby and has a hood-shaped part at the top.

The child is usually then placed under an outer blanket or rug and inside the stroller, which has rain covers pulled over if needed.

These layers are gradually reduced during the warmer seasons.

Although images of prams parked on streets are perhaps the most striking feature of the practice, this is not where most Danish babies sleep. Gardens, balconies and kindergartens are far more common places for parents or carers to put young children down for a nap.

That’s not to say a little one sleeping in a pram outside a café or similar public place isn’t unheard of. When this happens, the parent will be sat somewhere in view or use a baby alarm.

That parents nevertheless feel comfortable leaving children to sleep on the street can seem unbelievable to those witnessing the practice for the first time.

“There’s also something about us living in safe Denmark,” retired district nurse and author Sigrid Riise told Ekstra Bladet in 2013.

“We have always dared to leave our children outside, even though we have begun to keep an eye on them more in recent years,” she said. 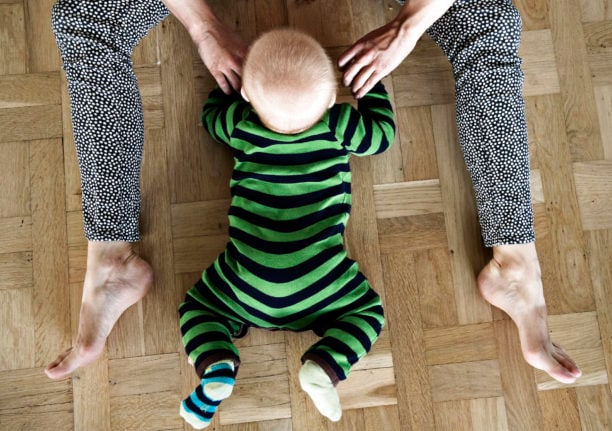 FAMILY
EXPLAINED: What are Denmark’s free baby packs and where are they available?