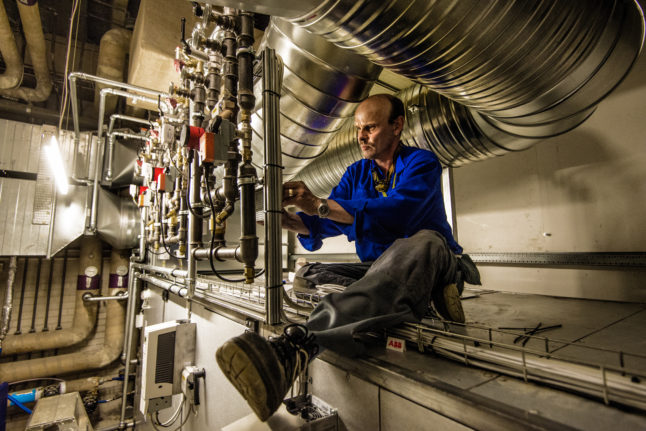 A Danish electrician is at work in this file photo from 2013. Photo: Søren Bidstrup/Ritzau Scanpix

Denmark’s ambitious timeline for a shift to green energy may be stalled due to a lack of skilled workers, newspaper Jyllands-Posten reports.

In particular, electricians, metalworkers and plumbers are will be in high demand and short supply. Between unskilled workers, skilled workers, and workers with higher education, the transition to green energy will create an estimated 45,000 full-time positions by 2030, according to the industry association Green Power Denmark.

‘Pirates of the Caribbean’ star Johnny Depp, who won a controversial defamation trial against his ex-wife Amber Heard just two days ago, plans to perform at two Danish concerts this month.

Depp will take the stage at guitarist Jeff Beck’s concert in Randers on June 29th, newswire Ritzau reports, and Amager Bio on June 28th, according to tabloid BT.

Mikael Qvist Rørsted, music and theatre director for the Randers venue where Beck and Depp will perform, says he sees the recent press coverage of the Depp-Heard trial as a positive. “For us, it makes him more topical, because he has been in the newspapers and the tabloids on that background,” Rørsted told Ritzau.

#MeToo cofounder Tarana Burke described the defamation verdict as a “toxic catastrophe” for the movement. Some domestic violence experts predict the case, and the vitriol Heard faced after presenting allegations against Depp, could have a chilling effect on victims of domestic violence coming forward.

Greenland calls for investigation into Danish campaign of  ‘involuntary IUDs’

The parliament of Greenland has called for an independent investigation into a Danish program that saw Greenlandic women implanted with IUDs, in many cases without their knowledge or consent, between the mid-1960s and 1991.

From 1966 to 1970, 4,500 IUDs were installed in women and girls as young as 13. That accounts for half of the Greenlandic women of childbearing age at the time.

For an hour and a half yesterday afternoon, customers of TDC and Telia were unable to call health emergency number 1813.

While 112 is reserved for ‘acute, life threatening illness or injury,’ you’re  advised to call 1813 before going to the emergency room or if your general practitioner isn’t available to address an urgent need.