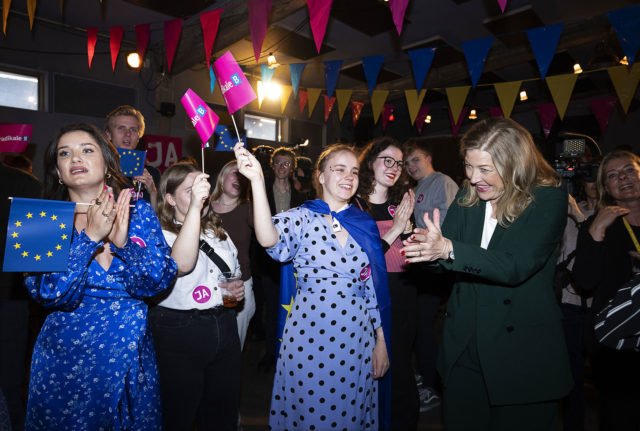 A clear majority of Danes has voted to revoke the country’s opt-out on joint EU defence policy in a national referendum held on Wednesday.

Public service broadcaster DR called the result of the referendum less than 90 minutes after polls closed, with around 58 percent of votes counted.

The distance between the “yes” and “no” votes was already insurmountable with under two-thirds of votes counted, DR said.

That was borne out with 66.9 percent having voted “yes” against 33.1 percent voting “no” with 100 percent of the votes counted just after 11pm according to KMD, which operated the referendum’s electronic result count.

Turnout for the referendum was 65.8 percent, DR reported.

“Tonight Denmark has sent a very important signal. To our allies in Europe and NATO, and to (Russian President Vladimir) Putin. We’re showing, that when Putin invades a free country and threatens the stability in Europe, we others pull together,” Prime Minister Mette Frederiksen told cheering supporters.

“There was a Europe before February 24th, before the Russian invasion, and there is another Europe after”, she said after the results came in.

“When there is once again war on our continent, you can’t be neutral,” she said.

Denmark’s decision was a “strong message of commitment to our common security”, von der Leyen tweeted, saying Denmark and the European Union would benefit. Michel also hailed the country’s “historic choice” on Twitter.

I welcome the strong message of commitment to our common security sent by the Danish people today.

Denmark’s expertise on defence is much valued.

I am convinced that both Denmark and the EU will benefit from this decision.

With the war in Ukraine forcing countries in Europe to rethink their security policy, Denmark voted earlier on Wednesday in a
referendum on whether to join the EU’s common defence policy 30 years after opting out.

The vote in the traditionally Eurosceptic Scandinavian country of 5.5 million people comes on the heels of neighbouring Finland’s and Sweden’s historic applications for NATO membership.

“I’m voting yes with all my heart,” Frederiksen said on Wednesday morning as she cast her ballot in Værløse on the outskirts of Copenhagen.

“Even if Denmark is a fantastic country — in my eyes the best country in the world — we are still a small country, and too small to stand alone in a very, very insecure world”, she said.

Turnout was projected to be relatively low in Denmark, a country that has often said “no” to greater EU integration, most recently in 2015.

Polls opened across the country at 8am on Wednesday and closed at 8pm.

By midday, more than 25 percent of voters had cast their ballots, according to a survey of polling stations conducted by Danish news agency Ritzau.

Until Wednesday’s referendum, the defence opt-out meant that the Scandinavian country, a founding member of NATO, did not participate in EU foreign policy where defence is concerned and did not contribute troops to EU military missions.

Denmark has been an EU member since 1973, but it put the brakes on transferring more power to Brussels in 1992 when 50.7 percent of Danes rejected the Maastricht Treaty, the EU’s founding treaty.

It needed to be ratified by all member states to enter into force. In order to persuade Danes to approve the treaty, Copenhagen negotiated a series of exemptions and Danes finally approved it the following year.

Since then, Denmark has remained outside the European single currency, the euro — which it rejected in a 2000 referendum — as well as the bloc’s common policies on justice and home affairs, and defence.

Copenhagen has exercised its opt-out 235 times in 29 years, according to a tally by the Europa think tank.

Frederiksen announced the referendum just two weeks after Russia’s invasion of Ukraine, and after having reached an agreement with a majority of parties in parliament.

Denmark has held eight previous referenda on EU issues, including in December 2015 when it voted “no” to strengthening its cooperation on police and security matters for fear of losing sovereignty over immigration.

Hundreds of billions of euros and counting have been shelled out since Russia invaded its pro-EU neighbour in late February.

Governments have gone all out: from capping gas and electricity prices to rescuing struggling energy companies and providing direct aid to households to fill up their cars.

The public spending has continued, even though European Union countries had accumulated mountains of new debt to save their economies during the Covid pandemic in 2020.

But some leaders have taken pride at their use of the public purse to battle this new crisis, which has sent inflation soaring, raised the cost of living and sparked fears of recession.

After announcing €14billion in new measures last week, Italian Prime Minister Mario Draghi boasted the latest spending put Italy, “among the countries that have spent the most in Europe”.

The Bruegel institute, a Brussels-based think tank that is tracking energy crisis spending by EU governments, ranks Italy as the second-biggest spender in Europe, after Germany.

Rome has allocated €59.2billion since September 2021 to shield households and businesses from the rising energy prices, accounting for 3.3 percent of its gross domestic product.

Germany tops the list with €100.2billion, or 2.8 percent of its GDP, as the country was hit hard by its reliance on Russian gas supplies, which have dwindled in suspected retaliation over Western sanctions against Moscow for the war.

Spending to continue rising
EU countries have now put up €314billion so far since September 2021, according to Bruegel.

“This number is set to increase as energy prices remain elevated,” Simone Tagliapietra, a senior fellow at Bruegel, told AFP.

The energy bills of a typical European family could reach €500 per month early next year, compared to €160 in 2021, according to US investment bank Goldman Sachs.

The measures to help consumers have ranged from a special tax on excess profits in Italy, to the energy price freeze in France, and subsidies public transport in Germany.

But the spending follows a pandemic response that increased public debt, which in the first quarter accounted for 189 percent of Greece’s GDP, 153 percent in Italy, 127 percent in Portugal, 118 percent in Spain and 114 percent in France.

“Initially designed as a temporary response to what was supposed to be a temporary problem, these measures have ballooned and become structural,” Tagliapietra said.

“This is clearly not sustainable from a public finance perspective. It is important that governments make an effort to focus this action on the most vulnerable households and businesses as much as possible.”

Budget reform
The higher spending comes as borrowing costs are rising. The European Central Bank hiked its rate for the first time in more than a decade in July to combat runaway inflation, which has been fuelled by soaring energy prices.

The yield on 10-year French sovereign bonds reached an eight-year high of 2.5 percent on Tuesday, while Germany now pays 1.8 percent interest after boasting a negative rate at the start of the year.

The rate charged to Italy has quadrupled from one percent earlier this year to four percent now, reviving the spectre of the debt crisis that threatened the eurozone a decade ago.

“It is critical to avoid debt crises that could have large destabilising effects and put the EU itself at risk,” the International Monetary Fund warned in a recent blog calling for reforms to budget rules.

The EU has suspended until 2023 rules that limit the public deficit of countries to three percent of GDP and debt to 60 percent.

The European Commission plans to present next month proposals to reform the 27-nation bloc’s budget rules, which have been shattered by the crises.