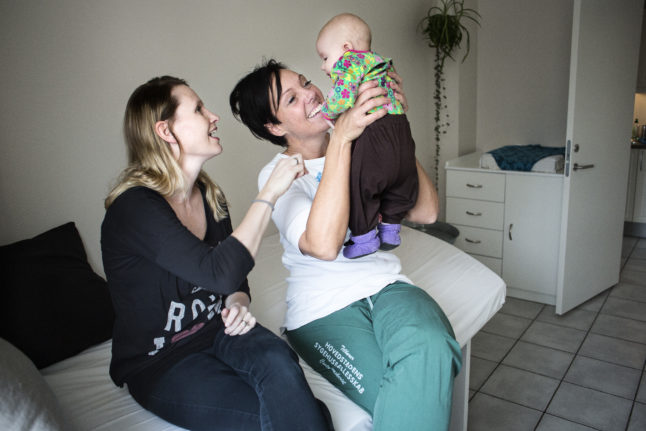 A new mother and midwife at a private birth clinic play with a baby in this file photo from 2015. Photo: Niels Ahlmann Olesen/Ritzau Scanpix

“The current geopolitical situation may mean that a number of companies are without access to gas and therefore have to stop or scale down their production,” a Tuesday morning press release from the agency says.

“The aim is to find out how the business pool can support gas-reducing measures in companies in the short term in an effective and rapid way.”

The Energy Agency says about 40 companies make up the list of “unprotected gas customers,” which together account for 20-25 percent of Denmark’s gas consumption. They’ll be eligible for grants from the Enterprise Fund, which supports “energy efficiency improvements and green transformation,” according to the agency.

Police step in on Herlufsholm debacle

Current and former students are invited to report their experiences at Herlufsholm, including for example physical or psychological abuse, according to a statement from the South Zealand and Lolland-Falster Police. They emphasize that psychological abuse became a criminal offense under Danish law beginning April 1st, 2019.

A hundred new midwives will join the ranks of the public health system, as per an agreement between the government, the Socialist People’s Party, the Social Liberals, the Red-Green Alliance, the Alternative party, and the Christian Democrats. Additionally, the government has earmarked 80 million kroner over the next three years for local recruitment and retention — hopefully in the form of bonuses to midwives, Lis Munk, chairwoman of the Midwives’ Association, tells Ritzau.

Another element of the agreement is that first-time mothers will be guaranteed the right to a two-day hospital stay, which will go into effect in early 2023 at the latest, Danish broadcaster DR reports. If the parents choose to return home after 24 hours, they’ll have the right to a home visit the second day after birth.

But according to Munk and the Midwives’ Association, it’s far from enough — while they welcome the agreement, she says that at least 200 new midwives are needed according to their calculations.

“Nowadays, women in labour may well find that there is neither a room nor a midwife for you when you need one,” Munk added. “And then you end up being alone for a large part of the birth.”

READ ALSO: Why is Denmark going through a baby boom?

Denmark has charged a suspected Nigerian pirate captured after a deadly shootout in the Gulf of Guinea with endangering
the lives of its sailors, prosecutor Per Fiig announced on Monday according to news wire AFP.

The 39-year-old who lost a leg in the clash with the Danish navy last November faces up to eight years in jail.

Danish authorities said four other pirates were killed and one more went overboard from the Danish frigate Esbern Snare on an anti-piracy patrol in international waters off West Africa.