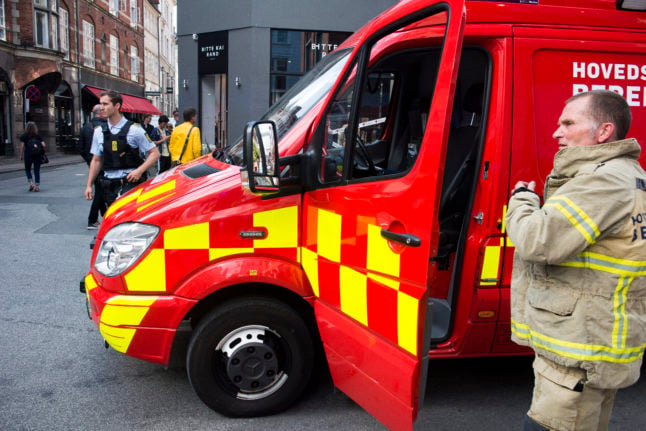 Copenhagen firefighters stand at the ready in this file photo from 2017. Photo: Mads Joakim Rimer Rasmussen/Scanpix 2017)

Bus on fire in Copenhagen

According to officials, a bus caught fire near Nordre Fasanvej and Godthåbsvej, which put the blaze near Frederiksberg hospital. The fire was extinguished by about 7:50, according to a tweet from Hovedstadens Beredskab — the Hovedstaden Emergency Preparedness department. Commuters should still expect traffic delays, they say.

The board of the prestigious Danish boarding school is making moves after a TV2 documentary that premiered last week revealed a culture of violence and rampant bullying.

The board determined Saturday that school principal Mikkel Kyellberg should resign and the prefect system overturned, Danish newswire Ritzau reports.

“It is fundamentally wrong and fraught with risks of bullying, violence and unhealthy power relations to put big children in charge of educating and sanctioning smaller children, Minister for Children and Education Pernille Rosenkrantz-Theil wrote on Facebook.

Despite the board’s actions on Saturday, Herlufsholm continues to be “under supervision” by the Danish Agency for Education and Quality, which has been in effect since December, Rosenkrantz-Theil adds.

Karsten Suhr, chairman of Denmark’s Private Schools, proposes studies of the culture at all Danish boarding schools out of an abundance of caution after the revelations on Herlufsholm, Ritzau reports.

About 110 arrested in weekend climate demonstrations

More than 100 protestors were arrested during Friday and Saturday’s demonstrations by the climate movement Extinction Rebellion, Ritzau reports.

While most of Saturday’s protest went as scheduled, Jesper Bangsgaard of the Copenhagen Police told Ritzau, about 35 protestors sat down at the intersection of Holbergsgade and Holmen’s Canal. About 10 were arrested in what are called “deprivations of liberty,” preventative arrests or administrative arrests in which police can only detain someone for 6 hours, compared to 24 hours with a normal arrest.

According to Ritzau, “the deprivations of liberty have taken place on the basis of the Police Act in order to maintain peace and order. For that reason, police can detain people even if they are not suspected of anything criminal.”

Those who weren’t arrested were fined under the Traffic Act or another law that translates awkwardly to English, the “Public Order Order.”

More beautiful scenes from #Vendepunktet day 1, where 139 activists were arrested. We continue today with a child-friendly action against the destruction of nature in #AmagerFælled. Join us 16:30 in Klagehegnet! Photos by @unwisemonkeys pic.twitter.com/Vb34UUVM75

Say goodbye to the sun — again

The Danish Meteorological Institute hopes you enjoyed the weekend’s idyllic weather, because it’s on its way out.

Monday promises to be the last “nice day with sunshine,” according to meteorologist Klaus Larsen. Expect clouds, but little rain, on Tuesday and erratic weather Wednesday.

“There will be some sunshine, and at times it will be more cloudy,” Larsen says of Wednesday. “Showers can also be expected, but only in the southern part of the country is there a prospect of more persistent rain, and then it will be between 13 and 18 degrees.”

Thursday is also expected to be a mixed bag with some sun, cloud cover, and perhaps a little rain in the south.

Thursday evening — the night before Great Prayer Day — is set to be a chilly one, between 5 and 10 degrees. Great Prayer Day itself should be between 10 and 15 degrees, the DMI predicts, with scattered showers and only very few appearances from the sun.