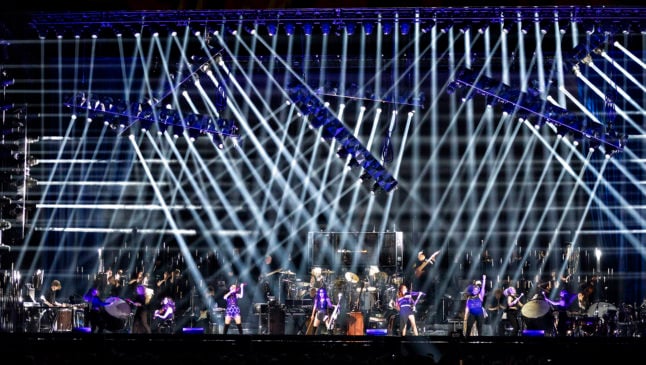 Oscar, Grammy and Golden Globe winning composer Hans Zimmer dressed in the colours of Ukraine and his partly Ukrainian orchestra on stage at the Royal Arena in Copenhagen on April 27th. Photo: Torben Christensen/Ritzau Scanpix

Denmark is to send armoured military transport vehicles to Ukraine along with anti-tank mines and mortar grenades, broadcaster DR writes.

The hardware is part of a donation worth 600 million kroner promised last week by Mette Frederiksen during a visit to Kyiv.

It is currently clear whether the equipment being sent by Denmark has yet left the country.

The government has been in discussions with Rwanda over the plan.

A spokesperson from the UN’s refugee agency UNHCR earlier this week said that the agency “does not view the idea of outsourcing asylum, whether to Rwanda or another country, as a responsible or sustainable solution.”

Britbox launches in the Nordics today. The BBC-ITV joint venture into streaming will include plenty of programmes from both broadcasters’ archives and original programming made for the platform.

Many of the titles included in the service have previously been available in Denmark on DRTV or TV2 Play. Four Britbox titles are reported to be exclusive to the service, however.

The service joins existing streaming giants like HBO and Netflix on the Danish market.

Danish brewing giant Carlsberg increased its turnover in the first quarter of 2022 despite withdrawing from a large part of its global market in Russia, the company said in results reported by news wire Ritzau.

Sales from its Russian division the first quarter were subtracted from the result, with that part of Carlsberg up for sale.

Q1 saw Carlsberg post a turnover of 14.9 billion kroner, 27 percent more than the first quarter of 2021.