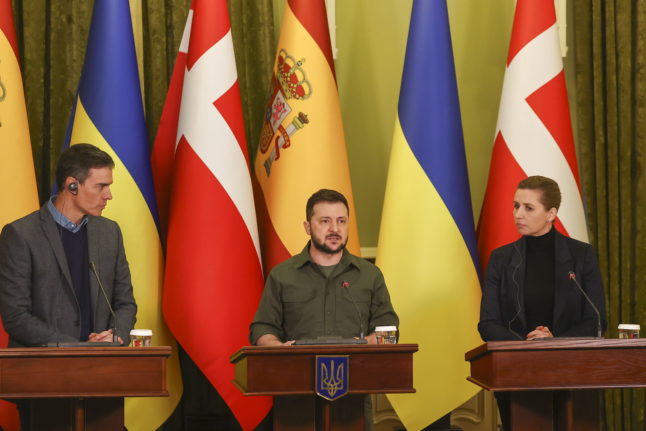 Frederiksen said earlier on Thursday that Denmark would send more weapons to Ukraine without specifying the type of weapons in question. She did not further elaborate at the briefing, at which Zelensky and Spanish prime minister Pedro Sanchez were also present.

“Denmark has given a lot of support to Ukraine from the beginning. Politically, financially and via sanctions. (And) with the lack of equipment, especially with what you need the most – weapons,” she said addressing Zelensky.

“And we will do what we can to also support Ukraine in future,” she said.

Denmark will give 600 million kroner to Ukraine to finance weapons and will also assist the country with mine clearance and rebuilding work, Frederiksen said.

PM Frederiksen: "Important discussions with President @ZelenskyyUa today. 🇩🇰 happy to contribute to accountability efforts and to deliver vital equipment in support of the brave Ukrainian people’s defence against #Russia’s war of aggression.
Our contributions include: pic.twitter.com/K2DCqt9FxQ

“We have seen today how important this is if people are to return to the places they’ve lived all their lives,” she said.

During the briefing, Zelensky said that Ukraine wanted to “build our defences not just on soldiers, but also heavy weapons”.

“The Russian army does not care about the number of dead soldiers. We do, and we want to save more lives, but this needs heavier weapons. We don’t have enough and we want to have more,” he said.

Sanchez condemned the “atrocities” allegedly committed by Russian forces in the town of Borodyanka outside Kyiv during the visit with his Danish counterpart.

“Shocked to witness the horror and atrocities of Putin’s war on the streets of Borodyanka,” Sanchez tweeted along with a video of his visit to the war-ravaged town.

“We will not leave the Ukrainian people alone,” he added.

The bodies of nine civilians, some showing signs of torture, were found Wednesday night in two graves around Borodyanka, a senior police official said.

The pullback of Russian forces from towns and villages around Kyiv left a trail of civilian deaths, beginning with discoveries in Bucha, that have led Ukrainian officials to accuse Russia of genocide.

Authorities in Kyiv say hundreds of bodies of  civilians have been found in areas controlled by Russian forces around the capital in the opening stages of the February 24th invasion.

Sanchez and Frederiksen arrived in Kyiv earlier on Thursday for talks with Zelensky.

Madrid has sent about a dozen planes to Ukraine carrying “hundreds of tonnes” of weapons and humanitarian supplies, Defence Minister Margarita Robles said on Monday.

In another sign of support for Kyiv, Sanchez announced on Monday that Spain would reopen its embassy in the Ukrainian capital “in a few days’ time”.

The embassy suspended activity the day after the Russian invasion on February 24th for security reasons.