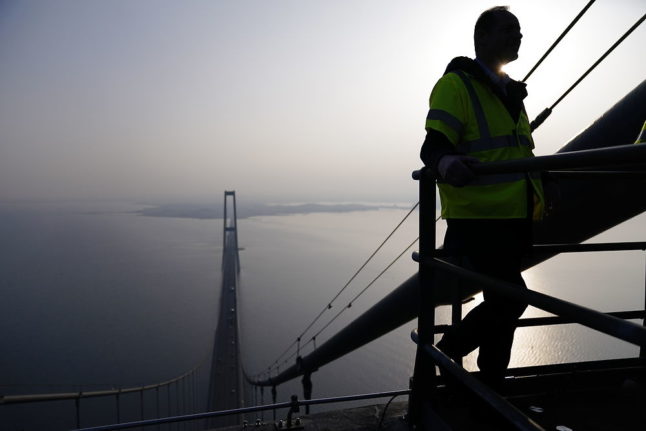 A view from the top of one of the pylons of Denmark's Great Belt Bridge, taken on March 23rd 2022. Photo: Mads Claus Rasmussen/Ritzau Scanpix

Some criticism has been levelled at the Danish state over plans to purchase 5 million Covid-19 test in April, despite the downward trend of the pandemic and end of testing recommendations in the vast majority of circumstances.

Newspaper Politiken reports that the tests are to be bought despite health authorities having a stock of 20 million on March 1st and municipalities also being well supplied.

The Central Jutland Region, which purchases tests on behalf of all five regional health authorities, is to continue with plans to give a contact to supply additional tests, according to Politiken’s report.

“This looks like a waste of tax money, time and resources,” professor of health economics Jes Søgaard of the University of Southern Denmark is quoted as saying by the newspaper.

The Confederation of Danish Industry (Dansk Industri, DI), an interest organisation for thousands of businesses in Denmark, has asked its members to help support food supplies to war-torn Ukraine.

Food which can be transported without refrigeration and easily prepared is urgently needed, and DI has called for Danish companies’ help after being in contact with authorities in Ukraine.

Pasta, rice, tinned beans and other tinned foods, flat bread, tea, coffee and drinking water are among the foods DI has asked companies to donate.

Close to 7 in 10 of the adult population of Debt have had Covid-19 in the last four and a half months, the national infectious disease agency State Serum Institute (SSI) said in a report released yesterday.

The data is taken from studies of blood from donors during the period.

The epidemic is currently declining after the many cases over the winter, with a latest estimate of the reproduction rate or R-number for the virus yesterday of 0.7. That means 10 people with the coronavirus pass it on to an average of 7 others, causing the epidemic to recede overall.

Weather: Sun in most areas on Wednesday with some fog

A layer of fog is obscuring parts of north and central Jutland this morning, with a thick fog warning in place in some areas.

The warning will be in place until 10 am, but some of the banks of mist will remain in coastal areas after this.

Once fog has clear in Jutland, there is likely to be sun and mild weather across all of Denmark, with temperatures reaching up to 10-14 degrees Celsius. It will feel chillier – around 6 degrees – while the fog persists in affected areas.