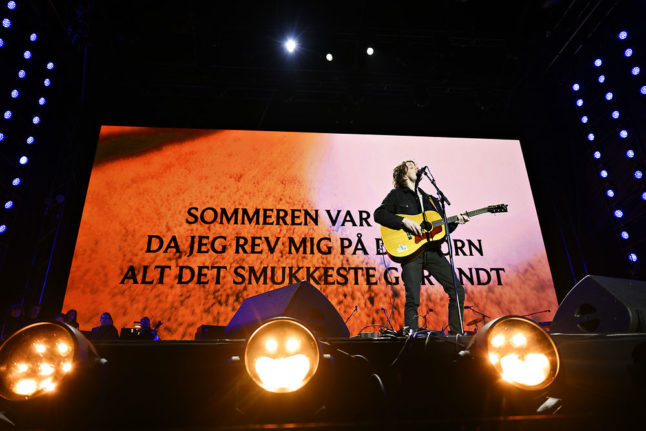 Danish singer Carl Emil Petersen during the "Sammen for Ukraine" - "Together for Ukraine" - concert at the City Hall Square (Rådhuspladsen) in Copenhagen on March 12th. Photo: Philip Davali/Ritzau Scanpix

The Russian ambassador to Denmark, Vladimir Barbin, in a letter submitted to newspaper Politiken made a “thinly veiled threat” the country could take over Danish companies in Russia that have ceased businesses activities there, the newspaper writes.

Several Danish companies including Carlsberg and Maersk have taken steps to pull out or cut back on trading with Russia following Moscow’s invasion of Ukraine.

“There is emerging a consensus on the extent to which it is advisable to establish external leadership at companies who have ceased their activities in Russia,” Barbin said in the letter, which was published by Politiken on Sunday night.

Charity Folkekirkens Nødhjælp said it set an all-time record in its annual fundraising drive this weekend as people across Denmark gave donations in huge numbers in support of Ukrainians affected by the attack on their country.

The Danish charity has run an annual national collection for 24 years, with 2022 breaking the previous record to bring in 17 million kroner, it said to news wire Ritzau.

That amount is just part of the impressive 750 million kroner raised by Danish relief organisations for humanitarian aid to Ukraine so far, with more donations coming in from a fundraising concert on Saturday night.

Monday to be sunny with some clouds on horizon

The clear weather that has graced Denmark throughout March is to continue today with a light to moderate southeasterly wind according to the Danish met office, DMI.

Temperatures will be around 8-10 degrees Celsius, according to the forecast.

Although more sunny days are to come this week, the weather could be a little wetter after today, with clouds and some rain reaching western and central Jutland later on Monday.

Sunday saw an additional 6,658 new cases of Covid-19 registered by health authorities from 29,591 PCR tests. These are among the lowest totals for both cases and daily tests since last autumn.

The figures give a test positivity rate of 22.5 percent, which is slightly lower than the proportion of positive tests generally seen in recent weeks. The infection trend for Covid-19 is declining across the country.

1,464 people with Covid-19 are now admitted to hospitals in Denmark, though a large number of these are in hospital for reasons other than the coronavirus. 25 are receiving ICU care with 7 receiving ventilator treatment.