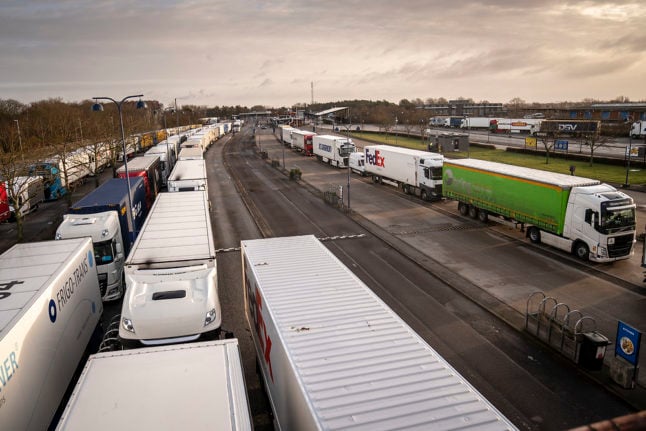 Trucks queue at the Danish ferry terminal at Rødby in February 2022. Denmark has billions of kroner of trade with Russia but the country does not represent one of its biggest import and export markets. Photo: Mads Claus Rasmussen/Ritzau Scanpix

This is 1.0 percent, respectively and 1.3 percent of the total Danish exports and imports in 2021.

The countries Denmark traded with the most in 2021 were Germany, the USA and Sweden.

Official data earlier released by Statistics Denmark show the value of trade with Russia for the Danish economy in 2020 was around 6.8 billion kroner.

That can be compared with the values of trade with two of Denmark’s biggest international trade markets – Germany and the United States – around 96 billion kroner and 76 billion kroner in 2020, respectively.

Mineral oils, iron and steel represent the main groups of materials, products or services that were imported from Russia in 2021. Imports from Russia accounted for 15 per cent and 18 per cent of the total imports of the product groups.

Exports to Russia consisted mainly of machinery and machine accessories for industry and accounted for 3 per cent of the total exports of the product group.

Maritime transport accounted for a lot of both exports and imports in 2021. These services are for example, when a Danish company is hired to transport a product with a container ship.

The graphic below shows the running prices of maritime transport service for import and export between Denmark and the United States, Germany and Russia. 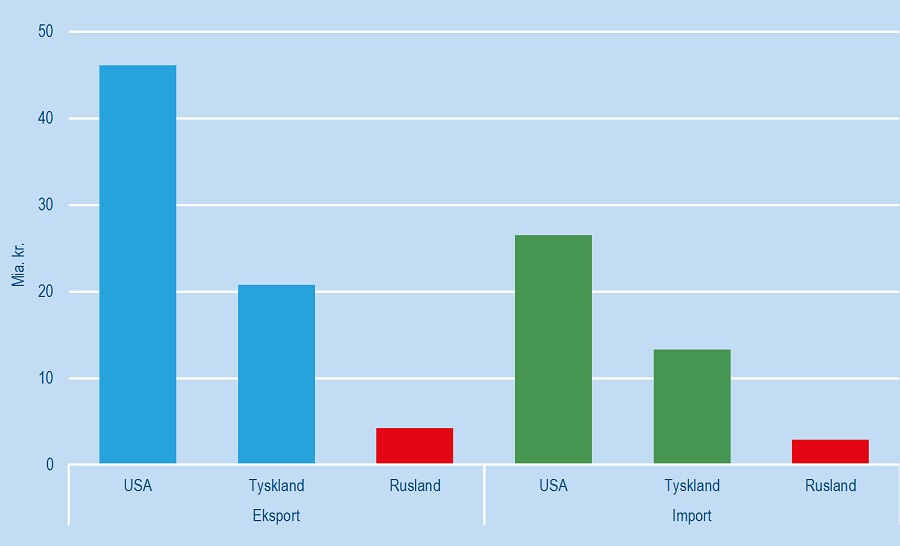 Gas and energy prices in Denmark are impacted by the instability around future supply caused by Russia’s invasion of Ukraine.

Sanctions on Moscow by the West in response to the invasion include a decision to ban Russian oil imports by the United States and United Kingdom, while Europe is in discussions related to the future of Russian gas imports with Russia in turn threatening to cut its supply to Europe. Germany has frozen approval of the Nord Stream 2 gas pipeline.

Denmark does import gas from Russia, but it should be noted that the value of these gas imports does not directly figure in official statistics for trade between the two countries.

“We.. import a lot of gas from Russia, but since it is transported through Germany, it is not registered as an import from Russia,” Stefan Anbro, special consultant with Statistics Denmark, said in the agency’s press release.

All natural gas in gaseous state, which Denmark imported in 2021, is registered as imports from Germany and amounted to 6.5 billion Danish kroner.

What are the main areas of trade between the two countries?

Russia exported $2.82 billion to Denmark in 2019 according to OEC.world, based on data from BACI.

The main products exported from from Russia to Denmark were refined petroleum ($1.65 billion), semi-finished iron ($289 million), and crude petroleum ($248 million).

In 2018, Russia exported services to Denmark worth $288 million, with other business services ($156 million), transportation ($79.6 million), and travel ($32.5 million) being the largest in terms of value, according to the United Nations International Trade Statistics Database.

In the same year, Denmark exported services to Russia worth $696 million, with transportation ($461 million), construction services ($71.8 million), and computer and information services ($39.9 million) being the largest in terms of value.

Which Danish companies have made announcements about Russia?

Shipping giant Maersk said on March 1st that it would stop taking new non-essential orders to and from Russia, due to sanctions imposed over Moscow’s invasion of Ukraine.

Citing the impact of sanctions, “bookings to and from Russia will be temporarily suspended, with exception of Foodstuffs, Medical and Humanitarian supplies”, Maersk said in a statement.

The Salling group said it had suspended the sale of Russian products on Saturday and that Netto would no longer sell Russian-made goods in Germany, Denmark and Poland.

Carlsberg said last week it was halting production and sales in Russia due to Moscow’s invasion of Ukraine. The brewery, which is the world’s fourth-largest, had earlier announced that it would halt new investments and exports from Carlsberg into Russia.

“Since then, we have ceased all advertising by both the Carlsberg Group and Baltika Breweries in Russia, and we will stop producing and selling our flagship brand, Carlsberg, in the Russian market”, it said on March 10th.

Russia is a major market for Carlsberg with around 9,000 staff. The Russian and Ukrainian markets are included in a central and eastern European business division with 11 other countries. The division represents around a quarter of Carlsberg’s total sales according to Ritzau.

Baltika Breweries will continue to operate — but as a separate business — “with the purpose of sustaining our employees and their families”, Carlsberg also said.

Vestas has also cut business ties with Russia, announcing on March 3rd it would stop all commercial activity in the country.

The wind power giant is to continue servicing existing turbines in both Russia and Ukraine, however.

“Vestas condemns in the strongest possible terms the Russian invasion and the gruesome acts Russian troops are committing in Ukraine,” the company said in a statement to broadcaster DR.

Danish energy company Ørsted meanwhile said that it cannot withdraw from an agreement to buy gas from Russian supplier Gazprom but will not extend its current contract when it expires in 2030.

Ørsted had come under pressure to extricate itself from its contract with Gazprom, which supplies Russian gas to the Danish company.

The company said in a statement last week that it condemned the invasion of Ukraine by Russia and that it had made other moves to reduce partnerships with Russian companies. It also said it would donate profits from its own sales of Russian gas to humanitarian help in Ukraine.

The above list, not exhaustive, shows the extent to which Denmark’s largest companies have responded to the war.

The Russian ambassador to Denmark, Vladimir Barbin, in a letter submitted to newspaper Politiken made a “thinly veiled threat” the country could take over Danish companies in Russia that have ceased businesses activities there, the newspaper writes.

“There is emerging a consensus on the extent to which it is advisable to establish external leadership at companies who have ceased their activities in Russia,” Barbin said in the letter, which was published by Politiken on Sunday night.