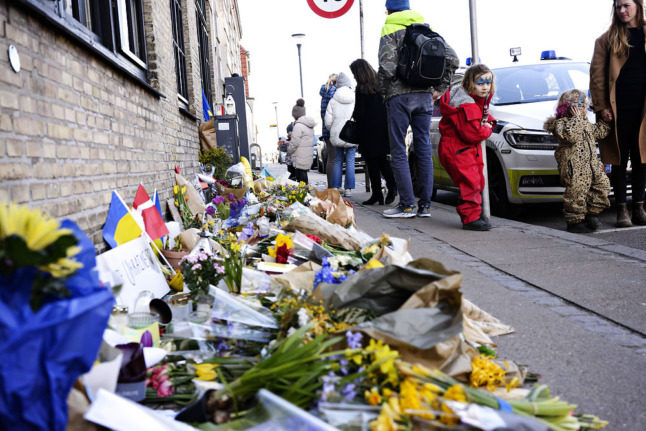 Prime Minister Mette Frederiksen apologised in person yesterday to six Greenlandic Inuits removed from their families and taken to Copenhagen more than 70 years ago as part of an experiment to create a Danish-speaking elite.

“What you were subjected to was terrible. It was inhumane. It was unfair. And it was heartless”, Mette Frederiksen told the six at an emotional ceremony in the capital.

“We can take responsibility and do the only thing that is fair, in my eyes: to say sorry to you for what happened,” she said.

The government issued a formal apology for the matter in December 2020, with Frederiksen now apologising in person.

Danish brewer Carlsberg, the world’s fourth biggest beer producer, said yesterday it was halting production and sales in Russia due to Moscow’s invasion of Ukraine.

“We stand alongside the Ukrainian people and people around the world in condemning the Russian invasion in the strongest possible terms”, the group said in a statement.

It said it could therefore not conduct “business as usual” in Russia.

Last week, the group announced that it would halt new investments and exports from Carlsberg into Russia.

“Since then, we have ceased all advertising by both the Carlsberg Group and Baltika Breweries in Russia, and we will stop producing and selling our flagship brand, Carlsberg, in the Russian market”, it said.

Carlsberg has been a majority owner of Baltika Breweries since 2008 and the latter employs 8,400 people, representing more than one in five of Carlsberg’s total global workforce.

Baltika Breweries will continue to operate — but as a separate business — “with the purpose of sustaining our employees and their families”.

Carlsberg said it felt “a moral obligation to our Russian colleagues who are an integral part of Carlsberg, and who are not responsible for the actions of the government”.

The Danish group said that, during the humanitarian crisis, any profits generated by its business in Russia would be donated to relief organisations.

Over 100 Danes want to fight in Ukraine

The Ukrainian Embassy in Copenhagen is receiving considerable interest from Danish nationals who want to go to Ukraine to help defend the country against the Russian invasion, broadcaster DR reports.

“Every day we receive more and more calls from Danes who wish to be part of the Ukrainian army and who wish to protect my country. I am impressed over how many Danes there are, because you are a relatively small country,” Ukrainian Ambassador to Denmark Mykhailo Vydoinyk told DR.

Justice Minister Nick Hækkerup recently confirmed that Danes could travel to Ukraine to fight for either side without falling foul of Danish law. A law forbidding travel abroad to areas in which a terror organisation is involved in military conflict has previously seen Denmark punish citizens who fought in the war in Syria.

More than 70 original NASA photographs including a celebrated image of Buzz Aldrin’s moon walk taken by Neil Armstrong were sold at auction in Copenhagen on Wednesday for more than 155,000 euros.

The Aldrin image, which fetched 5,373 euros, shows the astronaut on the surface of the moon in July 1969 during the first manned lunar landing. It was famously used on the cover of LIFE magazine.

Armstrong, the first man to step onto the Moon, can be seen in the reflection of Aldrin’s visor.

A total of 74 NASA photographs were put up for sale including 26 taken on the Moon during the Apollo missions in the 1960s and 1970s.