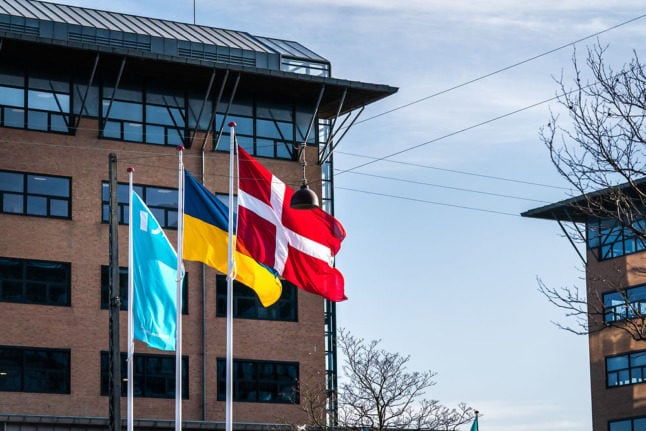 The Ukrainian flag next the the Danish flag in front of an office building at Kalvebod Brygge in Copenhagen on March 2nd, 2022. The Ministry of Justice has announced that private and public authorities can fly the Ukrainian flag until March 16th. Photo: Ida Marie Odgaard/Ritzau Scanpix

Vestas is the latest major Danish company to cut business ties with Russia, after announcing yesterday it would stop all commercial activity in the country.

The wind power giant is to continue servicing existing turbines in both Russia and Ukraine, however.

“Vestas condemns in the strongest possible terms the Russian invasion and the gruesome acts Russian troops are committing in Ukraine,” the company said in a statement to broadcaster DR.

A number of Vestas staff in Ukraine have been forced to flee or are concerned for their safety, the company said.

“We are worried about our colleagues, customers and commercial partners who are located in the besieged areas,” it said.

A Danish court on Wednesday sentenced three leaders of an Iranian Arab separatist group to between six and eight years in prison after they were convicted of spying for Saudi Arabia, news wire AFP reports.

Two members of the ASMLA (Arab Struggle Movement for the Liberation of Ahvaz), which Iran brands a terrorist group, will also be deported after completing their sentence, the court in Roskilde announced in a statement.

The court last month found the ASMLA leaders “guilty of creating an intelligence unit for a Saudi intelligence service over a period of several years”, based among other places at an address in Zealand town Ringsted.

Spring in Denmark often doesn’t really get going until April, but this year has so far defied that with March getting off to a sunny and mild start.

That will continue today with below freezing temperatures early this morning giving way to a bright, sunny day after sunrise. Blue skies are predicted for the whole country this afternoon.

Temperatures are forecast to reach between 4 and 6 degrees Celsius. Frost is expected to return tonight with possible fog tomorrow morning.

A total of 20,458 new cases of Covid-19 were registered by health authorities in the latest daily update yesterday, with metrics showing that the winter wave of the coronavirus is now receding.

95 of Denmark’s 98 municipalities have a declining incidence rate over the last week, with the exceptions being Solrød along with two islands, Læsø and Ærø.

Health Minister Magnus Heunicke said earlier this week that the number of people with a positive test who are admitted to hospital is now falling, another sign that the epidemic curve has turned.