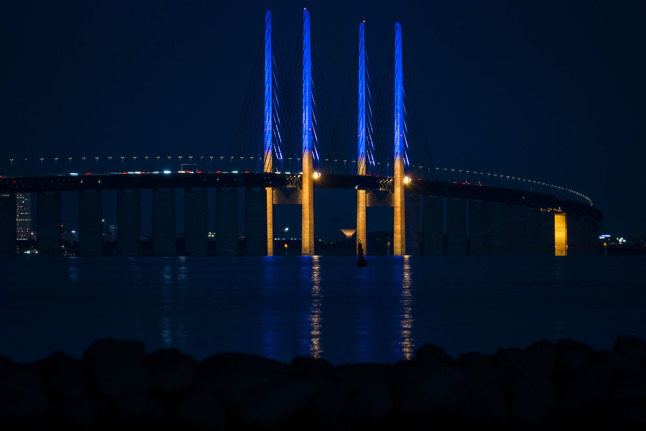 The 200-meter-high pylons on the Øresund Bridge, between Denmark and Sweden, light up in yellow and blue, in support of Ukraine, seen from Copenhagen on Saturday Feb. 26, 2022.. Photo: Martin Sylvest/Ritzau Scanpix

“It’s a choice that anyone can make. This goes for all Ukrainians who live here, but also for others who think they can contribute directly to the conflict,” she said in a press conference on Sunday.

“There is nothing at first sight that would legally prevent someone from going to Ukraine to participate in the conflict, on the Ukrainian side,” she added.

Denmark to refuse to play football matches against Russia

The Danish football association DBU has followed a number of other countries in saying it would refuse to play against the Russian national team due to the invasion of Ukraine.

“We stand shoulder to shoulder with the associations that have stated they will not play against Russia,” DBU director Jakob Jensen told news wire Ritzau.

FIFA on Sunday said that the Russian national team would be forced to play its matches at neutral venues without displaying the Russian flag or playing the anthem, and using the name “Football Union of Russia (RFU)”.

Poland earlier refused to play against Russia in a scheduled World Cup qualifying playoff in March with Sweden and the Czech Republic, who could also face Russia in a subsequent playoff, taking the same stance as Poland.

The Polish FA rejected the decision by FIFA on Sunday saying it would not play against Russia under those circumstances.

“As the situation is now, Russia is a state which has made an unacceptable, aggressive invasion of a free and independent Ukraine,” Jensen said.

The economy recovered strongly in 2021 following the Covid-19 crisis, growing 4.1 percent compared to the previous year according to Statistics Denmark figures.

Growth in Denmark can be attributed to factors including increased employment, more industry and higher consumer spending.

After a week in which six of its members of parliament quit the party and accusations were thrown and its leadership, the far-right Danish People’s Party (DF) has more bad news with a poll showing its support sinking to a historical low.

According to the poll, conducted by Voxmeter for Ritzau, DF currently has the backing of 4.3 percent of voters, down from 6.1 percent last week.

At the height of its powers, 21 percent of the electorate voted for the national conservative party in the 2015 general election.