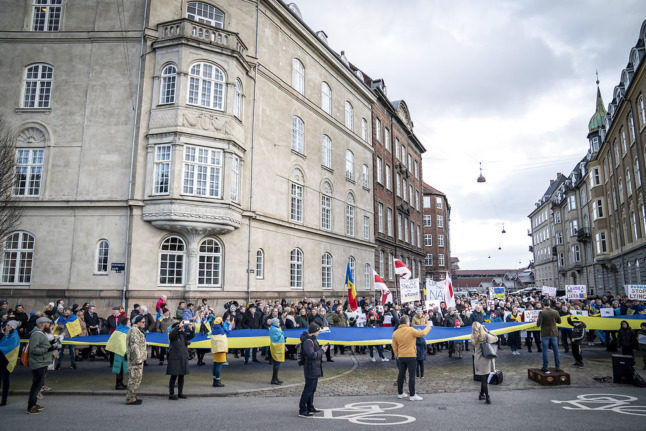 People demonstrate in Copenhagen against Russian aggression in Ukraine on February 23rd, prior to the Russian invasion of the country in the early hours of February 24th 2022. Photo: Mads Claus Rasmussen/Ritzau Scanpix

Prime Minister Mette Frederiksen has released a statement following the illegal invasion of Ukraine by Russia.

“A military attack on a free and sovereign nation has no place in Europe in our time. Russia’s actions are completely unacceptable. We will stand united, there will be consequences. My thoughts are with the people of Ukraine,” Frederiksen said in a statement released by the PM’s office.

PM Frederiksen: “A military attack on a free and sovereign nation has no place in Europe in our time. Russia's actions are completely unacceptable. We will stand united, there will be consequences. My thoughts are with the people of Ukraine.”

Other political party leaders have also condemned the military attack.

Poulsen said responsibility for the invasion was “solely Russia’s”.

The foreign minister, Jeppe Kofod, told broadcaster DR this morning that Denmark would coordinate with other countries over sanctions in response to the Russian invasion of Ukraine.

“This will be met by the West with hard reactions and sanctions. We will therefore coordinate with our European allies, but also with the Americans and British over a united, hard and clear response to this attack on Ukraine, a sovereign country in Europe,” Kofod said.

The Danish embassy in Ukrainian capital Kyiv has been closed for safety reasons, according to the foreign ministry’s website.

The Ukraine section of the Danish foreign ministry website states that there are “reports of explosions and rocket attacks in northern, eastern and southern Ukraine”.

The left wing party Red Green Alliance is facing criticism after a number of its municipal mayors were reported to be receiving two salaries. Various rules enable serving politicians to be paid a double salary, for example for serving in positions in municipalities and parliament or private sector roles consecutively.

Red Green Alliance is a longstanding critic of the practice but has declined to answer questions over its own mayors apparently partaking in it, broadcaster DR reported yesterday.