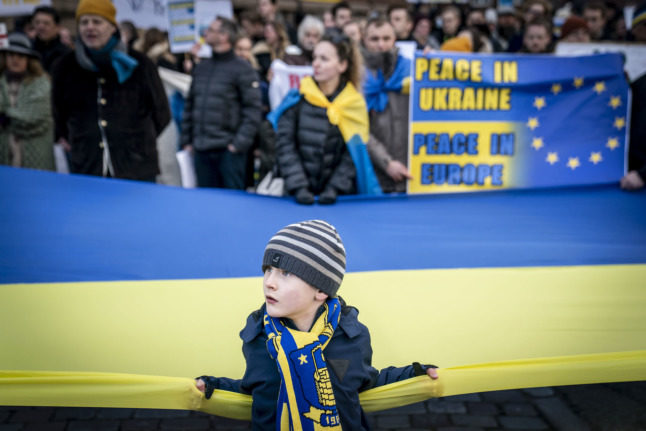 A boy wearing the blue and yellow scarf of Danish football team Brøndby takes part in demonstration in Copenhagen against Russian aggression in Ukraine on February 23rd, prior to the Russian invasion of the country on February 24th 2022. Photo: Mads Claus Rasmussen/Ritzau Scanpix

Denmark does not have enormous levels of Russian wealth invested in areas such as real estate, as is the case in some other Western European countries, notably the United Kingdom.

It is also the Nordic country furthest from Russia geographically. Norway and Finland both share a border with Russia, while it is also a close neighbour to Sweden, with Swedish Baltic Sea islands often identified as potential targets for Russian military action.

Denmark’s own Baltic Sea island, Bornholm, was briefly occupied by the Soviet army after the end of the German occupation of Denmark in 1945, but the two countries are otherwise relatively distant in a physical sense.

However, the government said this month it would be ready to send two F-16 fighter jets to its Baltic island of Bornholm “if judged necessary” amid concerns over what was then the threat of invasion of Ukraine.

As tensions over Russian aggression towards Ukraine increased in 2022, Denmark has taken some steps in response. The government said on February 1st that it is prepared to send military equipment to Ukraine. It has also increased military preparedness and recalled a navy frigate from Africa over the Ukraine crisis.

In a somewhat unprecedented step, the government said earlier this month that Denmark could eventually allow US military troops on its soil as part of a new bilateral defence agreement with the United States.

Frederiksen released a statement on Thursday morning in which she condemned the illegal invasion of Ukraine by Russia.

“A military attack on a free and sovereign nation has no place in Europe in our time. Russia’s actions are completely unacceptable. We will stand united, there will be consequences. My thoughts are with the people of Ukraine,” she said in a statement released by the PM’s office.

The foreign minister, Jeppe Kofod, told broadcaster DR this morning that Denmark would coordinate with other countries over sanctions in response to the Russian invasion of Ukraine.

“This will be met by the West with hard reactions and sanctions. We will therefore coordinate with our European allies, but also with the Americans and British over a united, hard and clear response to this attack on Ukraine, a sovereign country in Europe,” Kofod said.

Poulsen said responsibility for the invasion was “solely Russia’s”.

How will it impact Denmark economically?

Denmark’s economy is not closely tied to either Russia or Ukraine. Official statistics show the value of trade with Russia for the Danish economy on 2020 was around 6.8 billion kroner, with trade with Ukraine having a value of 2.1 billion kroner.

That can be compared with the values of trade with two of Denmark’s biggest international trade markets – Germany and the United States – around 96 billion kroner and 76 billion kroner in 2020, respectively.

Danish brewery Carlsberg said on Thursday it had closed its three breweries in Ukraine. Two of the breweries were close for the safety of its staff and the third due to gas supply problems, news wire Ritzau reported. The company has around 1,350 staff in the country.

Russia is a major market for Carlsberg with around 9,000 staff. The Russian and Ukrainian markets are included in a central and eastern European business division with 11 other countries. The division represents around a quarter of Carlsberg’s total sales according to Ritzau.

The Danish C25 stock exchange fell by just under four percent on Thursday morning. The index includes some of Denmark’s largest companies including Vestas, Novo Nordisk and Maersk. The long term effect on share prices is uncertain.

Indirect factors could have an impact on the Danish economy, notably rising fuel prices which are already at a record-high.

The Danish foreign ministry last week advised its nationals to leave Ukraine as the threat of invasion increased.

Danish authorities said prior to the Russian invasion this week that they were aware of around 100 of the country’s citizens who are still in Ukraine.

Around 240 other had left the country and registered this with the foreign ministry’s so-called danskerliste, a list on which Danes can register their whereabouts in foreign countries.

People who legally reside in Denmark can use the list along with Danish citizens.

The Danish embassy in Ukrainian capital Kyiv was closed for safety reasons as of February 24th, according to the foreign ministry’s website.

The Ukraine section of the Danish foreign ministry website states that there are “reports of explosions and rocket attacks in northern, eastern and southern Ukraine” and that “airspace is closed”.