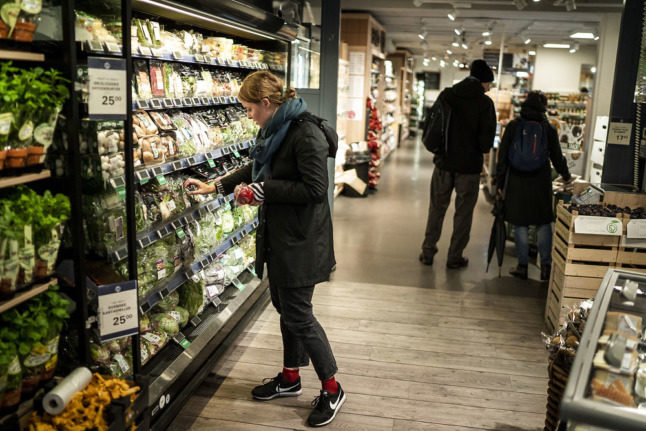 Shopping without a face mask - like in this 2019 file photo - returns to Denmark on February 1st 2022 as Covid-19 restrictions end. Photo: Asger Ladefoged/Ritzau Scanpix

After a first attempt at lifting all its restrictions between September and November, the Scandinavian country is once again ditching its face masks, Covid passes and limited opening hours for bars and restaurants.

“I’m so happy that this is all going to be over tomorrow. It’s good for life in the city, for nightlife, just to be able to be out longer”, 17-year-old student Thea Skovgaard told AFP the day before the lifting.

Nightclubs reopen on Tuesday, when limits on the number of people allowed at indoor gatherings also come to an end.

Only a few restrictions remain in place at the country’s borders, for unvaccinated travellers arriving from non-Schengen countries.

READ ALSO: KEY POINTS: What changes about life in Denmark in February 2022?

The easing comes as Denmark registers around 40,000-50,000 new Covid cases a day, or almost one percent of the country’s 5.8 million inhabitants.

“We have an extremely high coverage of adults vaccinated with three doses,” epidemiologist Lone Simonsen of the University of Roskilde told AFP.

More than 60 percent of Danes have received a third dose — one month ahead of health authorities’ schedule — compared to an EU average of just under 45 percent.

Including those who have recently had Covid, health authorities estimate that 80 percent of the population are protected against severe forms of the disease.

“With Omicron not being a severe disease for the vaccinated, we believe it is reasonable to lift restrictions”, Simonsen said.

The broad spread of the Omicron variant is also expected to lead to a “more robust and long-lasting immunity”, helping the country fend off future waves, she said.

Two years after the outbreak of Covid-19, the Danish strategy enjoys broad support at home.

In a poll published Monday by daily Politiken, 64 percent of Danes surveyed said they had faith in the government’s Covid policy.

“Without a Covid pass there will be a shift of responsibility”, she said.

Danes have increasingly used home tests to detect infection, but these are now being phased out and instead, anyone with symptoms is advised to stay home.

The Danish Health Authority currently “recommends” those who test positive to isolate for four days, while contact cases no longer need to quarantine.

Face masks and the Covid pass are also recommended for hospital visits.

The government said it does not expect to have to revert to new closures again but has remained cautiously optimistic.

“We can’t provide any guarantees when it comes to biology”, Prime Minister Mette Frederiksen said last week when announcing the country’s return “to life as we knew it before corona”.

“It’s really nice that this is ending but will we really live without any restrictions now? I doubt it,” said Cille Hjort, a fast-food vendor eager to see her patrons’ faces without masks again.

This is the second time Denmark has tried to return to a pre-pandemic lifestyle.

On September 10th, the country lifted all its restrictions, before reintroducing some of them in early November.

Museums, cinemas and theatre and concert venues then closed just before Christmas, and reopened again in early January.

Faced with a lower level of hospitalisations than in previous waves, several European countries, including France, Ireland and the United Kingdom, have announced the lifting or a considerable reduction of their restrictions, despite record or very high cases.

“Two years into the pandemic, populations in most countries have reached high levels of immunity, from vaccines or natural illness”, Simonsen said.

“This is how it ends, judging from what we have seen with historical pandemics”.

According to the World Health Organization, 73 percent of the European population has contracted Covid-19 at least once since January 2020.

Tyra Krause of Denmark’s public health and research institution SSI said meanwhile she expected Covid-19 to return in regular waves, “like the flu”.

“We may end up having to vaccinate risk groups ahead of the autumn to prevent severe cases”, she told science magazine Videnskab.