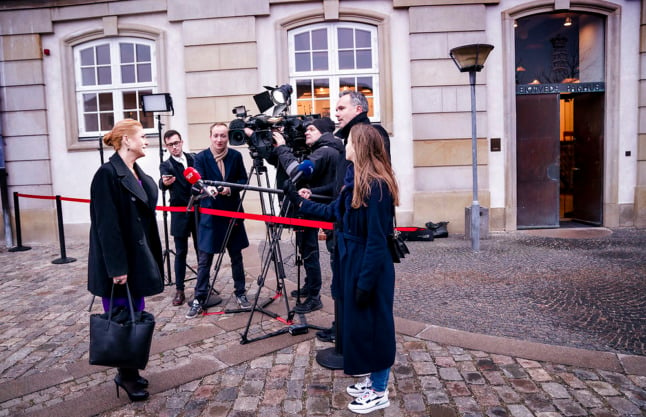 Støjberg was last week hit with a 60-day jail term for flouting her responsibilities as a minister following a trial in a rarely used court that oversees the conduct of ministers.

Danish law allows for those serving short sentences to remain free, so Støjberg is likely to spend her sentence under restrictions, including the use of an electronic tag, rather than in prison.

The 48-year-old self-styled champion of “Danish values”, a hugely popular politician who served as minister from 2015 to 2019, is expected to attend debates in parliament on Tuesday.

All political parties except those on the far right have signalled they deem her “unworthy” of continuing in parliament following her conviction, meaning Tuesday’s vote is expected to lead to her exclusion.

“It is unimaginable that one could be in prison serving a sentence while being an MP,” the Liberal (Venstre) party parliamentary chairperson Karsten Lauritzen told reporters last week.

Since 1953, only four members of parliament have been excluded.

In 2016, the government separated 23 couples without examining their cases following instructions from the minister.

The couples, most of whom had only a small age difference, were then placed in different centres while their cases were reviewed.

In seven of the cases, staff at the centres reported that the separated asylum seekers experienced suicidal thoughts or attempted to kill themselves.

The policy was found to be unlawful because the action was taken without allowing for exceptions or consideration of individual circumstances.

Støjberg, who enjoyed high approval ratings during her time in office, said the policy was designed to fight against forced marriages.

“I think this is a defeat for Danish values today, not just for me,” she said after her trial.

“I am being punished for trying to protect the girls. Frankly, something is very wrong,” she later said in a social media message.

However, Støjberg said she respected the verdict and accepted her sentence, adding: “My life goes on.”

On Friday, she chose to return an honorary order received from the queen.

As minister, Støjberg was at the forefront as Denmark’ centre-right government, propped up by the anti-immigration Danish People’s Party (DF), tightened restrictive migration policies from 2015-2019.

She passed a law allowing for migrants’ assets to be confiscated to finance their care in Denmark and boasted of having passed more than 110 amendments restricting the rights of foreigners.

She also published a picture of herself with a cake to celebrate the passing of a 50th law curbing immigration; called for the public to report pizzerias where staff did not speak Danish; and told a false story about a daycare banning pork from children’s lunches.

Despite the return of the left-wing Social Democrats to power two years ago, the Scandinavian country still has one of the most restrictive migration policies in Europe.