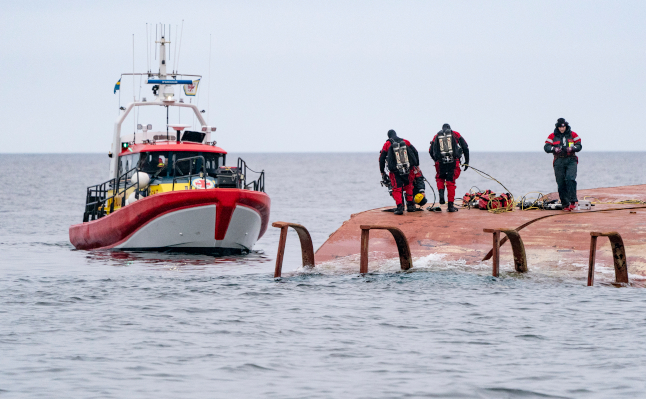 Sweden’s Prosecution Service said in a statement on Monday afternoon that an investigation into “aggravated drunkenness at sea”, “gross negligence in sea traffic” and “gross causing of death by negligence” had been opened.

Swedish news agency TT reported that the British citizen, who was on watch at the time, was suspected of all three alleged offences, and the Croatian citizen only of aggravated drunkenness at sea.

Nine boats and a rescue helicopter scoured for two missing crewmembers for hours following the early morning collision in the waters between the Swedish city of Ystad and the Danish island of Bornholm, the media spokesman at the Swedish Maritime Administration told AFP.

“One of the ships has capsized and is upside down,” Carl-Johan Linde said.

Around 10.30am the maritime authority cancelled the search at sea as the overturned Danish ship – Karin Høj – was towed closer to shore to enable divers to search inside.

Shortly after 3pm, authorities decided to cancel the rescue operation, after divers had found a body in the wreck.

“The person is deceased, but the next of kin have not yet been informed yet,” police spokeswoman Evelina Olsson told AFP.

Mats Kellerman, captain of one of the rescue boats, had already told reporters that “the chance of finding survivors is small”, noting the time that had passed and the cold water.

“The Scot Carrier released a smaller boat and looked for people and they heard screams from the water, but couldn’t find anyone,” Jonas Franzen, communications director at the Swedish Maritime Administration, told AFP.

Emma Valhem, spokeswoman for the Swedish Sea Rescue Society, said she did not want to speculate on the chances of finding the sailors alive.

She said with water temperatures around 4C at this time of year, the “situation is critical, right from the start”.

Søren Høj, manager for the Danish shipping company operating the vessel, told AFP there were two people in the crew and they were believed to be the ones missing.

Operations to prevent oil or other hazardous materials from being released into the water were also under way.

“There is currently no ongoing oil spill,” Sweden’s coastguard said in a statement.

The waters around Sweden’s southern coast see heavy traffic, as all ships going into the Baltic Sea from the Atlantic need to pass through the strait between Sweden and Denmark.